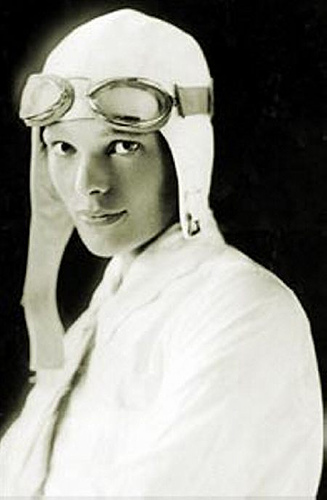 Kansas is poised to replace its statue of politician John James Ingalls in the U.S. Capitol’s National Statuary Hall with Amelia Earhart as soon as funding is secured, making her the 10th woman to be honored there (out of 100). The aviator and bestselling author was the first woman to fly solo across the Atlantic Ocean.

Each state has two statues of public figures in Statuary Hall, an overwhelming majority of which are men.

The Kansas state legislature resolved to erect the Earhart statue in 1999, but plans had stalled for lack of funding. The original resolution put the project in the hands of the City of Atchison, Kansas (Earhart’s hometown) and the Atchison Chamber of Commerce, but both were slow to make progress.

Finally, this summer, the gears are turning again, thanks to non-profit Equal Visibility Everywhere (EVE), dedicated to achieving gender parity in national symbols and icons. The Chamber of Commerce passed a resolution in May to support EVE in championing the project–which includes securing funding for the creation, transportation and installation of the Earhart statue. The state’s governor, Mark Parkinson, signed a statue replacement agreement [PDF] earlier this month officially authorizing the building of Earhart’s statue. EVE is now helping Atchison raise funds to build the monument and planning a competition with the city for the statue’s design.

EVE is also working to add five more women figures in Statuary Hall representing Ohio, Maryland (Harriet Tubman), Florida, California and New York. Another project is the addition of giant helium balloons featuring women to parades, including one of Earhart.