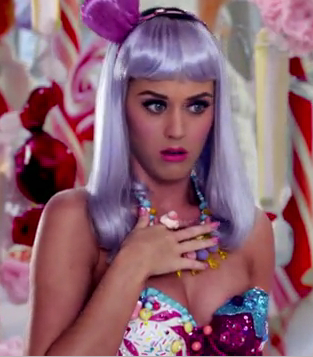 Katy Perry’s California Gurls is, without doubt, the it pop-song of the summer. It’s everything a summer pop song should be–sweet and easy to digest. The accompanying video lays bare, well, both Perry and the candy-like nature of her pop. Directed by Matthew Cullen, the video features Perry in a literal Candyland (called Candyfornia), lying nude on a cloud of cotton candy, wearing a cupcake bra and defending herself and her sweet-flavored friends from rapper Snoop Dogg and his minions of Gummi Bears.

Yes, in Perry’s fictional world of Candyfornia, war can be waged with bra-mounted frosting cannons and women are made of sugar and spice and everything nice. The California Gurls video is literally steeped in stereotypes of pop’s consumption of women. The pastel frosting-covered world that Perry inhabits says, “Eat me, consume me, indulge in your candy-colored fantasies of femininity.” But there’s no irony to be found in Perry’s video: It’s a verbatim homage to both the sugary production of other pop princesses and the work of artist Will Cotton.

Cotton burst onto the arts scene about a decade ago when he began exhibiting paintings of confectionary dreamlands inhabited by nude women. He served as art director of Perry’s video and, as the blog Gastronomista shows in a video-still-by-painting comparison, left his sugary stamp on the aesthetics. His painting of the nude Perry on the pink cotton candy appears on the cover of her album–released today–Teenage Dream.

It’s typical of both Perry and Cotton to use women’s sexuality to tantalize and titillate, so they seem a perfect fit–and, in fact, Perry sought out Cotton for both the video and the album cover. She said:

Before I even discovered Will, I was into all things cute and girly and beautiful and edible. The first record, it was all fruit, and now it’s all confectionary.

Perry’s verbal slippage between “girly” and “edible” is telling.

Cotton, the French-schooled American, builds dioramas in his studio out of actual confectionery–meringues, cupcakes, cookies–then photographs them and creates his pastel oil paintings from the photographic studies. The references to rococo are obvious, as Cotton’s saccharine dreamworlds pay homage to François Boucher and Jean-Honoré Fragonard. Like those artists, Cotton takes endless pleasure in turning the muck of oil paint into gourmand visions of delectability. But also like those who preceded him, Cotton’s paintings are beautifully constructed scenes in which women are presented for decoration or sexual consumption.

Some have suggested that Cotton’s paintings are a critical look at American consumerism, where sweetness “becomes cloying, even repulsive,” but his paintings, like Perry’s video, are anything but critical. Like the stereotypes they embrace, they’re empty and vapid. If anything, Cotton’s paintings and his collaboration with Perry reveal how desire objectifies women and drives consumer culture.

In the California Gurls video, Perry enacts one of Cotton’s paintings, but it’s not the Candyland she inhabits that makes one feel sick.  Rather, as John Frankel wrote in Artforum:

Cotton and Perry’s collaboration–both the video and the portrait which will grace the album cover–are a literal smorgasbord, in which Perry’s body is offered up to hungry eyes. There, and on a recent cover of Rolling Stone where she posed in her underwear, she plays the coy ingénue, offered up for the consumption of the male gaze. We haven’t come far at all since the 1970s: I’m Katy. Eat Me.

ABOVE: Katy Perry in “California Gurls” 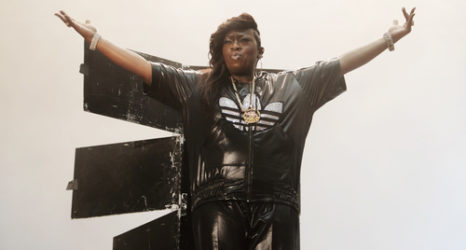