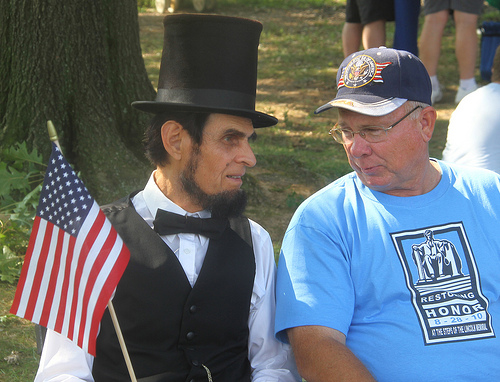 Just in time for the long weekend, Ms. brings you the must-reads you might have missed this week–from a Pocahontas-poetry mash-up, to gender inequality on Wikipedia, to live reporting from Glenn Beck’s Restoring Honor Rally. Happy reading, and enjoy the holiday!

The Wall Street Journal talked to Sylvia Ann Hewlett, founding president and chairman of the Center for Work-Life Policy think tank, about the current exodus of women from Wall Street and why they’re fleeing.

Wikipedia’s main page mentions nine men for every one woman, and women account for only 13 percent of “Wikipedians”–those who edit, research and write the pages. Deeply Problematic offered an analysis of the disparity, and what ought to be done about it.

Over at Broadsheet, Tracy Clark-Flory explained why she doesn’t “(heart) boobies”, arguing that “people are taking offense at an edgy breast cancer slogan–but for all the wrong reasons.”

Despite working for a gay organization, Glennda Testone, Director of the LGBT Center of New York, thought she was completely straight–until one special night at a lesbian bar in Dallas. She shares her experience with Big Think, as part of their series “Coming Out: Stories of Gay Identity”.

Renee Martin made a compelling case that jails need to accommodate trans inmates at Womanist Musings.

From Racialicious (via Sociological Images): Samantha Figueroa’s awesome video mash-up combines scenes from Pocahontas with a spoken word poem, “Slip of the Tongue,” by Adriel Luis.

And finally, Campus Progress wrapped up its coverage of “BECKAPALOOZA” this week. In the epic final installment, Campus Progress reporter Sara Haile-Miriam searched for black people, interviewed birthers, and quizzed Tea Partying attendees at Glenn Beck’s Restoring Honor Rally in Washington D.C. Haile-Miriam is awesome, the wingnuts were in rare form, and the videos are amazing.