hanging out with bell hooks in kentucky - Ms. Magazine
Skip to content 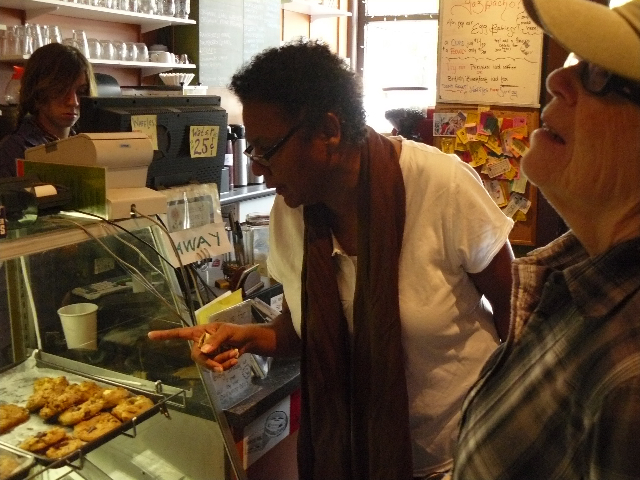 Ten years or so ago, I heard bell hooks speak at Berea College as a visiting scholar. Her lecture, about why You’ve Got Mail was a deeply cynical movie, struck a cord. Although I wasn’t the pert blond owner of an independent bookstore (played by Meg Ryan in this version), I had run an independent press and was printing my own artist’s books. I wasn’t about to be seduced into giving up my press (or bookstore) by the likes of Tom Hanks, but I was spending time wondering about what I was going to do in my 50s, especially since I found myself leaving Los Angeles as much as I could and spending time in Kentucky, where I grew up and where bell grew up.

In the 1970s I’d moved to Los Angeles for the first year of the Feminist Studio Workshop at the Woman’s Building and stayed to work at the Women’s Graphic Center there and at other art venues but was now feeling a pull back home, something I’d never expected. I’d found a place to live and work, wanting my own artist’s retreat surrounded by the sound of crickets rather than police helicopters and the incessant roar of the freeway. At the time of bell’s lecture I’d read that she had wanted to come home, too, but felt Kentucky was still too racist. I ended up writing her a letter, telling her some of my experiences returning and my strong feeling that Kentucky needs some of its exiles to come back home.

We both left Kentucky to seek our fortunes and now were back. Part time at least.

It took several more years for us to become friends. We were both still tied to the places we’d left, and to teaching and lecturing out of state. In the last few years we’ve both had parents pass, discussed how to build a supportive community in a place we both love, expressed despair at the lack of good conversation about art and writing, driven to Lexington for Vietnamese food and wondered aloud what our futures hold during this last major productive part of our creative lives, the 50­-to-80-year-old part. What we do know is that it isn’t at all like the earlier decades of life, the striving of the 30s and 40s. We’ve done that, now we both want something else.

Last weekend I took bell to meet a friend, Suzanne, who is a freelance photographer. Suzanne and I have been photographing together during this long hot Kentucky summer and I thought bell and Suzanne would appreciate one another. Suzanne has seen newspaper jobs evaporate as news goes online and she comes to this question of “what IS next?” from a different perspective. We spent a pleasant afternoon sitting in a small town coffee shop, talking about some of the amazing times we’ve lived through, how we want to feel the energy of the 1970s but re-incarnated in new projects or paths we each might choose. Of course we don’t have anything neatly figured out and that is as it should be, but this conversation is definitely to be continued. …

Photo of bell hooks and Suzanne at a small town cafe in Kentucky by Susan E. King.

Susan King is an artist and photographer. She lives in Kentucky. www.susanking.info