What Would bell hooks Say? - Ms. Magazine
Skip to content 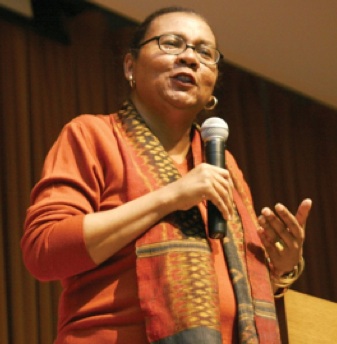 Recently it had dawned on me that a significant voice in black feminist cultural criticism had virtually disappeared from academic and liberal public media. In the previous decade, bell hooks (née Gloria Watkins) eagerly shared her thoughts with us on Oprah Winfrey, Spike Lee, the Anita Hill vs. Clarence Thomas Senate hearings, art, Madonna and the latest movie.  Now, I find myself wondering, “What would bell hooks say?”

What would she say about Tyler Perry’s popularity among African American audiences and the widespread influence of the “Black Church”?  What would she say about Beyoncé, about Lady Gaga or about the passing of Michael Jackson? What would she have written about any of the public cultural moments centering on black women this past decade–from the Janet Jackson scandal at the Super Bowl in 2004 to the media coverage of post-Katrina New Orleans in 2005 to the Duke Lacrosse scandal in 2006 to the Don Imus vs. Rutgers University women’s basketball showdown in 2007 to the race-gender debates of the U.S. presidential campaign in 2008 to the Rihanna and Chris Brown domestic violence incident in 2009 to the various Essence magazine controversies and constant policing of First Lady Michelle Obama’s fashion and lifestyle choices this year? The very fact that most of these controversies were publicly framed as “racial” moments and not “gendered” ones speaks volumes about the suppression of feminism in general, and black feminism in particular.

Because I am an avid reader of hooks’ work and freely admit to her influence in shaping my own sense of black feminism, I can imagine how she would boldly respond to these events in her signature “happy to be nappy” in-your-face rhetoric of resistance against “white supremacist capitalist patriarchy.” She would first identify the radical politics of “loving blackness” (as she recently reminded us of the revolutionary politics of building self-esteem in the March issue of Essence this year) before launching into a rhetorical assault against the systemic and symbolic oppressions mentioned above. She would challenge the phallocentrism of Madea, the framing of Michael Jackson as a self-loathing black man when he showed glimpses of resistance to white supremacist capitalism and the “feminism” that pop stars like Beyoncé and Lady Gaga supposedly model.  She would condemn the media coverage of post-Katrina New Orleans and expose the sex-negative, anti-black-woman-hating in the Duke lacrosse scandal.  She would definitely question the “politics of respectability” that the women of Rutgers University relied on in their defense against Don Imus’ hate speech. And, of course, she would shift our focus to the systemic framework of patriarchy, white supremacy and capitalism, rather than criticize individuals, when addressing the cases of Rihanna and First Lady Michelle Obama.

That is what I imagine bell hooks would say because that’s what I would say, and I know I owe my black feminist cultural criticism to her and others of her generation (including Beverly Guy-Sheftall, the late Audre Lorde, Barbara Smith, Paula Giddings, Michele Wallace and Alice Walker).

I fully respect bell hooks’ recent decision to shift her focus from media criticism to spirituality and the radical politics of love, but the work in black feminist cultural criticism continues. I can think of other black feminist cultural critics, including myself, who can pass on the torch, and a new generation of scholars, activists, public intellectuals and writers is emerging on this very site and throughout the feminist blogosphere.

In this generation of feminist scholars and activists, we could all point to our favorite bell hooks hymnal: Yearning, Black Looks, Teaching to Transgress, Feminism is for Everybody. Despite her current “missing in action” status in the new millennium, hooks has fortunately left behind a body of work on radical black feminism. Now, instead of asking, “What would bell hooks say?,” I simply assign her work to students and encourage them to dismantle the “white supremacist capitalist patriarchal” frameworks embedded in news coverage, popular culture and other cultural artifacts. Now, when I ponder bell hooks’ voice, I might visit a black feminist blog to consider how hooks’ influence is stamped on it.

In other words, bell hooks lives on, even in her current retirement from media criticism.  What is most critical at this juncture is the recognition of her legacy and our willingness to listen to the voices that have emerged in her wake. The black feminist cultural criticism that I engage in is fully indebted to hooks. May those of us engaging in this theory and methodology–especially those of us embarking on this journey into public intellectualism– continue to ring her bell as we sound the alarm on oppression.