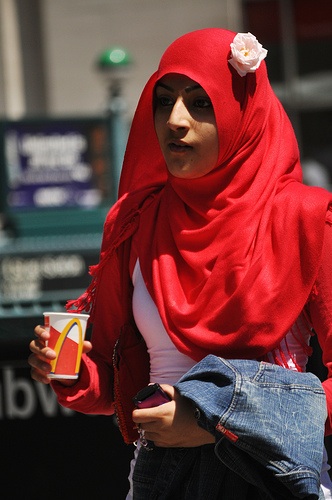 Much has been said about Imam Abdul Rauf, the Imam behind the proposed Park 51 Islamic Cultural Center in New York City, which would stand a few blocks from the site of the 9/11 attacks nine years ago today. In the intense controversy surrounding the construction of the community center, he has been called a “radical,” despite ample evidence of his longtime efforts to do interfaith work and bridge misunderstandings between Muslims and other communities. Meanwhile, little attention has focused on his wife, Daisy Khan, who has been a force behind the construction of the Center and many other initiatives to promote Muslim women’s leadership around the world.

U.S. media outlets, especially conservative ones, are adept at focusing on Muslim women only when they fit the orientalist stereotype of submission and servitude. But as founder of the Women’s Islamic Initiative in Spirituality and Equality (WISE), Daisy Khan is quite the opposite. For example, WISE has established an unprecedented international Shura (consultative) Council aimed specifically at  dislodging patriarchal interpretations of Islamic law so prevalent in Muslim countries. Going beyond previous initiatives that simply condemn acts such as the stoning and whipping of women in countries like Afghanistan and Iran, WISE takes on theological interpretations that allow Islam to be used to justify such barbaric acts. Additionally, WISE has planned a Muftiyyah training program to train Muslim women to be jurists. Few, if any, programs exist within the Muslim world to train Muslim women in Islamic law or to begin excavating faith from patriarchy.

So far, the debate around the Islamic Cultural Center has been defined in terms of rights and sensitivities: the sensitivities of families who lost loved ones in the 9/11 attacks on the World Trade Center pitched against the First Amendment rights of Muslim Americans to have a place of worship at a site of their choosing. However, another dimension of the debate is highlighted by Daisy Khan’s innovative positions on Islamic law and Muslim women–particularly Muslim American women.

The status of Muslim women under Islamic law is a deeply contested realm – one swamped by the weight of religious tradition, particularly juristic tradition interpreted solely by men for centuries. The task of redefining this tradition in a way that preserves legitimacy but eliminates patriarchy is a daunting one. In the U.S., under the helm of leaders like Daisy Khan–as well as scholars such as Asifa Qureshi, Amina Wadud, Leila Ahmed and Laleh Bakhtiar–WISE has been flourishing. In addition to the task of taking back Islamic law, initiatives like the Mosque Pray-In movement have brought the issue of equality within religious spaces to the forefront of the Muslim American agenda.  Furthermore, WISE has condemned practices like female genital mutilation and attacked the myth that domestic violence is permitted in Islam. Muslim women have been developing theological arguments against stoning and sexual control of women, none of which could have been debated in environments that do not guarantee religious freedom and plurality. All of this has been part of the project of constructing a distinctly American Islamic tradition that is deeply committed to the centrality of women’s voices and perspectives within faith.

The controversy over Park 51–let alone the recent Christian fundamentalist threat to burn Korans–has cast a pall over the tide of progress that Muslim American women were riding, and the consequences are likely to be felt on several fronts. U.S. Islam is ideologically diverse, and progressive initiatives like those headed by Daisy Khan have been routinely challenged by conservative groups within the Muslim community. The fact that Park 51 is under such extreme scrutiny is likely to strengthen such conservative voices that want to focus on protecting the community from the virulent Islamophobia unleashed by the controversy rather than promoting women-centered initiatives. Globally, the fact that U.S. Muslim women have seemingly failed to garner support from the American public at large is likely to impact their ability to encourage similar initiatives elsewhere, where religious freedom lies on ever shakier ground.