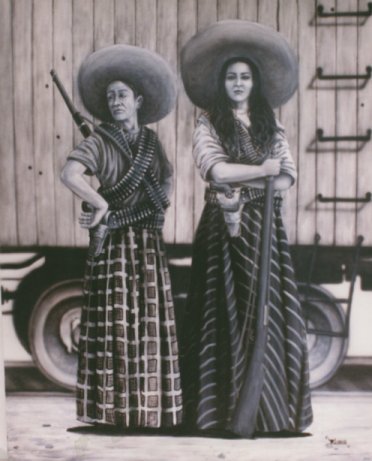 Because of what falls left of the hyphen in “Mexican-American,” I am often asked how my family celebrates Mexican Independence Day on September 16 (today). I have to confess that we never have. As native Californians, my family, just like everyone else on our suburban block on July 4th, merely lit up the ol’ barbeque and an assortment of Cherry Bombs and M80s. However, I do recall how and when my mother actually embraced her own Mexican independence back in the 1970s: by joining a movimiento better known as The Tupperware Party.

For years while I was growing up, I overheard my father, time and time again, berate my mother for not adhering to the budget that he had so meticulously drafted when they were first married–a budget, I’d like to note, that had remained unchanged over the course of their 16 years of marriage despite severe inflation.

Like any other woman in America, my mother craved some of the finer things in life: an evening art class at our local community college, a copy of Valley of the Dolls in hardcover.  My father, however, balked at such extravagances and continued to keep a tight-fisted rein on their joint bank account.

My mother needed a way out; she needed a job. She needed to go to Aunt Lola’s Tupperware party. And she did.

Yes, it was at Aunt Lola’s Tupperware party that my mother, as well as my aunts, cousins and one cash-strapped grand tia, learned that they could single-handedly combat a regime of domestic financial fascism after merely enlisting into the (then) radical movimiento de plastico.

The checkbook did not go over well with my father. “What’s that?” he demanded, glaring at it.

When my mother informed him that the checkbook was for a new bank account, her new separate bank account, he nearly flipped. My mother was not only becoming less financially dependent on him, but she had started to actually make more money than him. To be outearning your Latino hubby? Not very acceptable in a culture where machismo runs strong. It was a shift that took my father a long, long time to accept, but to which finally he waved a white flag of surrender.

Yes, like so many women entering the work force in the 1970s, my mother no longer needed her husband’s permission to cross the borders of his restricted budget zones. She began to do and buy whatever she wanted for herself, for my sister and for me. As a young girl, it was very empowering to witness my mother have control of her own pocketbook and, consequently, make her own decisions.

And so today, September 16, I offer El Grito: the battle cry of independence that was cried on September 16, 1810, not only to those who have fought and continue to fight and question the common norm, but I offer a grito to my mother whose risk of confronting tradition was quite revolutionary. !Viva la independencia!