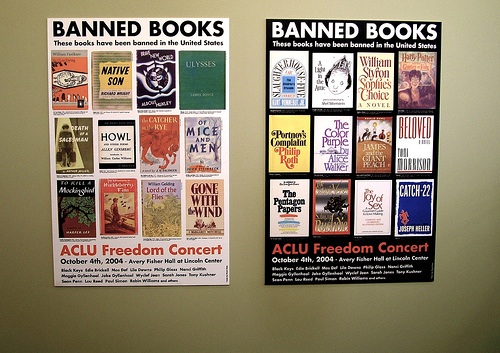 September 25th through October 2nd is the American Library Association’s Banned Books Week, showcasing those dangerous tomes that might warp the minds of young and old alike! Perhaps they touch on–lower your voice–sex. Or sexism. Or racism. Or on progressive politics. Perhaps they’re anti-war! In any case, someone or some group has either challenged these books in an attempt to remove them from library shelves, or the books have actually been removed. Fortunately, the association explains:

Due to the commitment of librarians, teachers, parents, students and other concerned citizens, most challenges are unsuccessful and most materials are retained in the school curriculum or library collection.

To celebrate Banned Book week, you can attend a banned book event near you. Or, we dare you to read a banned/challenged feminist book! In no particular order, here are ten Ms. favorites:

Do you have any favorite banned feminist books that we’ve left out?