Did You Know It's Hereditary Breast and Ovarian Cancer Week? - Ms. Magazine
Skip to content 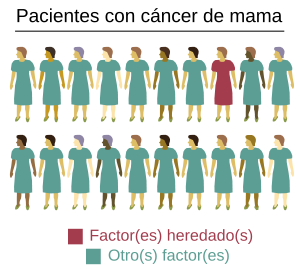 Today, September 30, is the last day of Ovarian Cancer Awareness Month; tomorrow, October 1, is the first day of Breast Cancer Month. Are they connected in any way other than the fact that they are both (mostly) women’s cancers? Absolutely.

Those of us who carry mutations on the genes known as BRCA1 and BRCA2 are at extraordinarily high risk of both diseases. And this week, September 26 to October 2, is National Hereditary Breast and Ovarian Cancer (HBOC) Week. October will be awash in pink, but I suspect you’ve never heard of HBOC Week. Why? Because the House of Representatives just passed the legislation on September 15 to create this new national week of recognition.

In this election season where Congress, as Sen. Claire McCaskill (D-Mo.) put it, is so polarized that it “could not pass motherhood and apple pie,” the resolution to create HBOC Week and Previvor Day passed unanimously, and comments on the floor of the House were a reminder that these cancers touch the lives of almost everyone.

Yesterday, September 29, was the first National Previvor Day. I am a previvor because I have a mutation on the breast-cancer gene known as BRCA2, which makes my breast cancer risk as high as 80 percent and my ovarian cancer risk as high as 25 percent. I am a previvor because, despite these overwhelming odds, I have not developed breast or ovarian cancer. I took aggressive steps to avoid these diseases by sacrificing my breasts and ovaries before cancer could take hold of them.

My mother was diagnosed with breast cancer when she was 43; I am now 46. Although I kept my breasts long enough to nurse my babies, many women with genetics like me have their bilateral mastectomies before pregnancy in order to protect their lives and be able to raise their children. According to a recent study in the Journal of the American Medical Association, BRCA-positive women who remove their ovaries live longer, which confirms what our doctors have been telling us for years.

So why do people like me need a special week and a special day? Aren’t there enough nationally recognized “awareness” months and days already? Certainly many cancer survivors feel that creating a Previvor Day is unjustified. After all, we previvors have not endured the surgery, chemotherapy and/or radiation that cancer survivors must endure. They have battled the beast; we are mere spectators.

But we are spectators with a unique view of the devastation breast and ovarian cancer can cause. We have often been profoundly changed by our experiences with loved ones who have battled the beast. And we also know that, despite medical technology’s ability to test for the BRCA genes and predict who is at highest risk for these cancers, many women are stricken before they’ve even been informed about available genetic testing. National HBOC Week can help put an end to women being surprised by inherited breast and ovarian cancer without any clue that they were at high risk.

HBOC Week is for the hundreds of thousands of women whose doctors will never look at their family history and start a discussion about genetic testing. Those of us who do know need to start informing others about genetic cancers. Encourage women to start conversations with their doctors. You may help save the life of your yoga instructor, your child’s teacher or your best friend.

Joi Morris is co-author of Positive Results: Making the Best Decisions When You’re at High Risk for Breast or Ovarian Cancer. She is an Outreach Coordinator for FORCE: Facing Our Risk of Cancer Empowered, and an advocate in science for Susan G. Komen for the Cure.

Joi went to law school in Nashville at Vanderbilt University then moved to Los Angeles in 1989 to launch her legal career. After practicing law in Los Angeles for 13 years, Joi took the leap to become a stay-at-home mom. Never one to be idle, she immediately replaced paying work with volunteer work. Joi now devotes her time to raising her children and to breast cancer advocacy, including providing peer support for women who are struggling to decide what to do about their genetically inherited breast and ovarian cancer risk. She is co-author of Positive Results: Making the Best Decisions When You're at High Risk for Breast or Ovarian Cancer; is an Outreach Coordinator for Facing Our Risk of Cancer Empowered (FORCE) -- the national organization for women at high risk of breast and ovarian cancer -- in Los Angeles, California; and is an Advocate in Science for Susan G. Komen for the Cure.