We Spleen: The Sexists Running the Tribune Company - Ms. Magazine
Skip to content 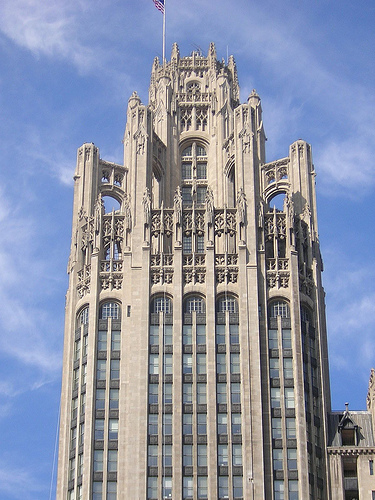 Owner of the Tribune Company Sam Zell and his right-hand man Randy Michaels have a joke to tell, and it’s not sexist.

That is, it’s not sexist–even if it’s about the “knockers” on a senior vice president–because the duo rewrote the sexual harassment handbook for the the second-largest media company in the United States.

According to this October 5 article in The New York Times, Tribune’s corporate culture under Zell’s ownership makes Goldman Sach’s antics look like child’s play. Company-wide emails have been peppered with swears and sexual innuendo. Executives’ conduct loud conversations about the sexual suitability of women employees. A new employee handbook reads:

Working at Tribune means accepting that you might hear a word that you, personally, might not use. …You might experience an attitude you don’t share. You might hear a joke that you don’t consider funny. That is because a loose, fun, nonlinear atmosphere is important to the creative process. … This should be understood, should not be a surprise and not considered harassment.

In other words, rather than change their behavior, Tribute’s top executives instead used their power to redefine it. (These corporate-culture guidelines, of course, fly in the face of the Equal Employment Opportunity Commission (EEOC), created by Title VII of the 1964 Civil Rights Act, which states: “Harassment can include unwelcome sexual advances, requests for sexual favors … [and] offensive remarks about a person’s sex. For example, it is illegal to harass a woman by making offensive comments about women in general.”)

Zell bought the Tribune Company in 2008 and promised to breathe new life into the floundering media concern, which includes newspapers such as The Chicago Tribune and the Los Angeles Times, radio stations such as WGN-AM in Chicago, and the Chicago Cubs (since sold). Instead, he hired Michaels, a former shock jock, and a number of other executives from radio who lacked newspaper experience–but not experience with the EEOC. Michaels, for one, had already settled an EEOC and three civil sexual harassment suits. According to The New York Times, “Tribune Tower, the architectural symbol of the staid company, came to resemble a frat house, complete with poker parties, juke boxes and pervasive sex talk.”

With more than 70 percent of the company’s business wrapped up in the deteriorating newspaper industry, it’s not unexpected that changes would be made to reinvigorate the company. So did Zell’s “loose, fun atmosphere”–however illegal and offensive it may have been–at least pay off on the financial front?

Judging from the company’s 2008 bankruptcy–the largest in the history of American media, according to The Times—the answer is no. In fact, since Zell used employee pensions (converted into ownership stakes) to finance part of his purchase of the company, everyone is in hot waters with this bankruptcy, which has stagnated for more than a year and a half in court. And while all newspaper companies have taken a hit over the last few years, the Tribune company has fallen farther than its competitors.

Are Zell and his cohorts ready to admit they might have mismanaged the company, both economically and culturally? Not yet–especially given the millions in bonuses the management has received throughout the bankruptcy.

You have a complaint about this? In Zell speak: “Don’t be a p*ssy.” Yes, he really did say that to one of his women employees: the former editor of The Chicago Tribune.