How to Come Out in Five Easy Steps - Ms. Magazine
Skip to content 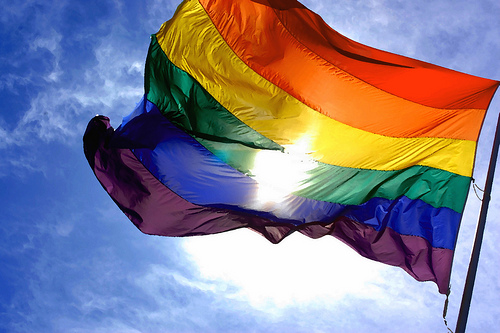 The first time I “celebrated” National Coming Out Day I was a sophomore in college. The LGBTQ group on campus dubbed October 11th Blue Jeans Day, encouraging LGBTQ students and their allies to wear blue jeans as a visible sign of support. I’ll admit, I took this a little too seriously and wore not just jeans but also a blue jean vest with a blue shirt underneath. (Cut me some slack, it was the ’90s and I was young and overly eager.)

In the 10 years since I’ve emerged from the fishbowl of college life, coming out has proven more difficult. Considering the growing number of lesbians and gay men in the media and popular culture, surprisingly many people still imagine everyone around them is straight, so the burden of coming out falls to the LGBTQ individual again and again and again. You don’t get to come out just once and be done with it. (And lest you think, dear straight readers, that this doesn’t apply to you, consider that coming out as a feminist is also a fraught experience that we should perhaps handle with equal sincerity to the coming outs of our LGBTQ friends and neighbors. How else are we going to prove that feminism is still necessary today, and that it hasn’t gone by the wayside in the  new millennium, if we don’t tell people that we are feminists and why?)

In my post-college years, I was terrible at coming out. I had more than a few arms-length friends and acquaintances who didn’t know for years that I dated women or that I, in fact, had a woman partner. It certainly wasn’t deliberate on my part, but when appropriate moments slipped past, I never quite managed to get back to a place where I felt comfortable revealing that kind of information. As many of you know, it’s awfully difficult to have a conversation with someone when you’re constantly dancing around which pronouns to use, or trying to decide whether it’s more disingenuous to refer to your girlfriend as your roommate or just act as if you live alone.

Frustrated, when I moved out West I promised myself to stop the madness and just be honest. There’s a lot of advice out there for those of us who are coming out for the first time, but what about those of us who have been “out” for years, but still struggle with those day-to-day interactions? Here are a few ideas, gleaned from my experience:

1. Play it cool.
I’m fully in support of throwing a Coming Out party in the non-cotillion sense–but coming out doesn’t have to be so grandiose. Unless you’re an elected official or a movie star, you don’t have to make a declaration about your sexual orientation. It can be as simple as using a female pronoun* instead of a male or gender-neutral one when referring to your date last weekend (or, if you’re not dating anyone, when referring to an ex).  Whomever you’re speaking to may not make the connection right away, but if you’re nonchalant and take the moment in stride, they’re more likely to follow your lead. And now they know.

* I’m assuming a female reader here simply for syntactical ease. Obviously, this advice can pertain to anyone–male or female, gay, lesbian, bisexual, transgender, queer or straight ally.
2. Don’t let the moment pass.
This is easier said than done, but if you come out at the first viable opportunity (again, discussion of weekend plans is always a good vehicle), it will make all future conversations exponentially simpler. This doesn’t mean you have to blurt out your sexual orientation upon first greeting, but the moment you find yourself hesitating over a pronoun or balking at a personal question try to let go and answer honestly. What you’re saying isn’t anything that should be perceived as abnormal or wrong, so don’t treat it as such.  It gets easier the longer you employ this tactic, but it gets harder the longer you wait.
3. Don’t feel like you have to adhere to labels.
I identify as a lesbian, but I rarely come out as such. My coming out conversations usually go something like this:

Me: I just moved to Colorado recently.
Other person: Why’d you move?
Me: My partner got a job out here.
Other person: Oh, what does your partner do?
Me: She teaches at [local university].

If someone asks, which they rarely do unless we become close friends, I’m happy to clarify that I’m a lesbian, but I don’t think it’s absolutely necessary to make the distinction at first blush. It also feels a lot less technical to talk about your life as a unique individual rather than classify yourself as part of a group identity. That said, you should still assert your commitment to LGBTQ rights and equality; those are label-less issues!

4. Don’t get defensive.
As long as the person you’re talking to doesn’t become openly hostile, try to not get defensive if they react with surprise or have questions. It’s natural to feel defensive if someone questions you, but even if you’re offended assess honestly whether or not they’re being intentionally insulting or are just ignorant before you respond. Either way, correct any incorrect assumptions or stereotypes right away; however, if it’s the latter, try to be as friendly as you can while enlightening them. Some people are genuinely curious, and it’s counterproductive to be combative with someone who just wants to know more about you.

5. Choose your battles.
This one is fairly obvious, but it bears mentioning. If at any point you feel vulnerable, unsafe or extraordinarily uncomfortable coming out to a certain person or in a certain situation, don’t do it. Coming out may be vitally important to your personal well-being and to the visibility of the LGBTQ community at large, but it’s not worth risking bodily harm. If you absolutely feel you must come out this person, make sure to do so in a safe space with friends who support you nearby. Getting into a bar fight with a neo-Nazi in the middle of the night doesn’t do anyone any good.

Do you have more advice for LGBTQ individuals (and feminists!) who want to come out but don’t know how? Please comment!

Photo from Flickr user Marlith, under license of Creative Commons 2.0.