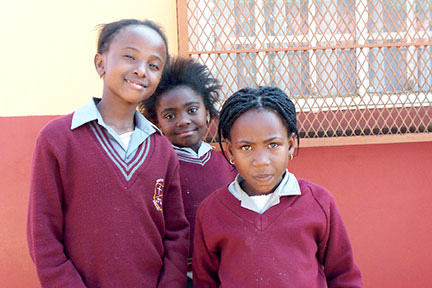 This week South African trade unions reached a hard-fought settlement, Malawi activists sought the release of women jailed for witchcraft, an Australian couple charged with procuring an illegal abortion is off the hook, Nepal considered raising the legal age for marriage and Secretary of State Hillary Clinton worked to put cell phones in the hands of 150 million more women.

SOUTH AFRICA: The government and trade unions reached an agreement Wednesday after months of negotiations and a three-week strike in August and September. 1.3 million government workers were pushing for an 8.6 percent wage increase, but the unions settled Wednesday for a 7.5 percent increase, augmented by a $117 monthly housing allowance. Two of the most powerful trade unions on strike–the teachers’ union and the nurses’ union–are predominately composed of women workers. As journalist Victorine Ntambo explains, the gendered composition of the workers intensified the hostility of the strikes:

It is assumed that women are by nature educators and nurturers because, amongst other things, they often come to the aid of those in need for nothing in return. When teachers and nurses go on strike, it seems to touch a raw nerve in our country’s consciousness because it is similar to a mother who goes on strike and refuses to nurture the family or do any housework until she gets some recognition for it.

MALAWI: Activists seek the release of 86 women jailed for witchcraft in Malawi. Emboldened by President Bingu wa Mutharika’s pardon earlier this year for an openly gay couple who had been sentenced to 14 years in jail, activists now call for the release of these elderly women accused of teaching witchcraft to children. Witchcraft is not a crime in Malawi, but  widespread belief in the practice has led the government to consider its criminalization. Many of the women have been jailed for up to six years and forced to perform hard labor.

AUSTRALIA: A Queensland couple accused of procuring an illegal abortion was found not guilty. The trial of Tegan Leach, 21, and Sergie Brennan, 22,–which sparked international attention and outcry–ended yesterday with the courtroom filled with cheering and applause after the verdict was announced. Although abortion is illegal in Australia, this trial was the first time since 1986 that the law was enforced. Despite the not-guilty verdict, Queensland’s premier, Anna Bligh, said that the country’s abortion laws will not be changed.

NEPAL: The Parliament is considering a bill to raise the legal age of marriage from 18 years old to 20 years old. Officials hope it will reduce maternal mortality rates as well as discourage teenage pregnancy. Dr. K.C. Naresh, director of the health department’s family health division, told the BBC: “We want to encourage all Nepali women not to have children until they’re 20. If they have them younger, they may not be sexually mature and this can lead to complications.” In the last decade, Nepal has made strides in reducing maternal mortality, even being recognized at the United Nations Millennium Development Goals Summit last month for cutting the country’s rate by more than 50 percent. However, according to UNICEF, between 280 and 830 women out of every 100,000 still die from pregnancy-related causes in Nepal.

GLOBAL: According to a United Nations report released Thursday, mobile telephones are a highly effective tool for raising the world’s poorest out of poverty. Just as the report found that access to mobile phones had an especially beneficial effect on women, who are approximately 70 percent of the world’s poor,  a new initiative by Secretary of State Hillary Clinton and former British first lady Cherie Blair focuses exclusively on mobile phones’ promise for poor women. mWomen, launched last week, aims to close the gender gap in cell phone ownership and usage in developing countries. An estimated 300 million more men than women own cell phones, and the gap is particularly pronounced in South Asia. Clinton told The Telegraph that reducing the technology gender gap was a significant element of women’s empowerment because phones are integral in:

… access[ing] health care, report[ing] violence and coordinat[ing] disaster relief and aid efforts in often volatile countries. They are also widely used for trade and banking in areas where there is little official infrastructure and widespread corruption.

The initiative aims at making cell phones available to another 150 million women globally.