10 Things To Know About Ntozake Shange and "For Colored Girls" - Ms. Magazine
Skip to content 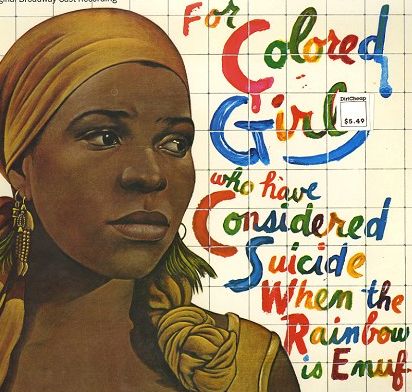 Poet, novelist, playwright and high priestess of black bohemianism Ntozake Shange (b. 1948) is resurgent in 2010. She and her sister, Ifa Bayeza, recently released the novel Some Sing, Some Cry, and her first and best-known play, For Colored Girls Who Have Considered Suicide when the Rainbow Is Enuf has been turned into a feature film by Tyler Perry, which comes out in  November.

Here are ten things you should know about Shange and Colored Girls before you head to your nearest cineplex:

1. Colored Girls first took shape in 1974 as an electrifying performance by Shange and four of her close friends in a Berkeley, Calif., women’s bar, the Bacchanal. As they moved and danced, they recited Shange’s poems–about coming of age, heartbreak, sexual assault, redemption. The choreopoem went on to Broadway to win an Obie and be nominated for Tony and Grammy awards.

2. Colored Girls has been a favorite of college theater departments, with audiences across the decades waiting to see the actresses come out attired in signature brown, yellow, purple, red, green, blue and orange dresses–the colors of the rainbow, plus brown–calling out: “I’m outside…chicago, …detroit, … houston, …baltimore, … san francisco, … manhattan, … st. louis”

3. Poet Ishmael Reed observes: “No contemporary writer has Ms. Shange’s uncanny gift for immersing herself within the situations and points-of-view of so many different types of women.” Like Lucille Clifton, Gwendolyn Brooks and Toni Cade Bambara–to name a few writers no longer  here–Shange cared to feed us when we were starved for stories about women of color.

4. Tyler Perry’s black women characters—including his salty female alter ego Madea—serve up melodrama and moralism, along with some tiresome stereotypes. So it’s with reason that we wonder how his funhouse-mirror approach to black life will pair with Shange’s kaleidoscopic view.

5. Shange optioned the film rights to Perry, but she has spoken candidly about forbidding him from having Madea do a cameo as a “colored girl.” Perry’s churchified high camp is no match for a poet like Shange who can pen the line: “& if jesus cdnt play a horn like [archie] shepp/ waznt no need for colored folks to bear no cross at all.” Amen.

6. Shange loved blackness, so she shattered its conventions. Her depictions traverse class backgrounds, gender roles, sexual desires, vernaculars and geographies. She’s just as likely to reminisce about growing up in a segregated—but loving and intellectually stimulating—all-black community in 1950s St Louis as she is to imagine a girlish date with the Haitian revolutionary Toussaint L’Ouverture.

7. Shange’s signature phonetic spellings (wd, cd, waz) pay tribute to Paul Laurence Dunbar and Zora Neale Hurston, writers who also valued the poetic genius of everyday folk who could turn a phrase or re-colonize the English language until it felt like home.

8. Shange helped us see the agency that Third World feminism brought to women of color. Colored Girls arrived during a cultural renaissance when communities of color—Black, Latino, Asian, Native American–were working in solidarity. Feminism provided the backdrop. In the introduction to Colored Girls, she discussed creating the play in an environment “inundated with women poets, women’s readings, & a multilingual woman presence, new to all of us and desperately appreciated.”

9. Her border-crossing ways, love of vernacular, diaspora and musicality lend Shange’s work both timeliness and timelessness. She crafted many representations of artists transforming the world into one they desired.

10. In a 2010 that has been filled with stories of queer boys who’ve considered and committed suicide and the media telling people of color we are destined to compete rather than share solidarities, it’s a very good time to return to Ntozake Shange and revisit her vision of reclamation and self-determination.