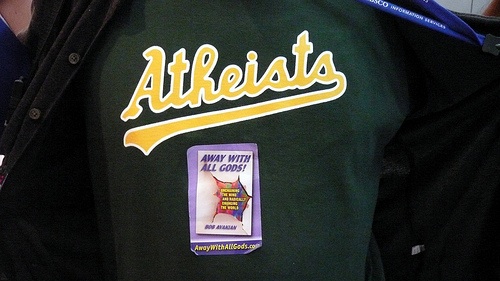 If you’ve been following the rise of so-called “New Atheism” movement, you may have noticed that it sure looks a lot like old religion. The individuals most commonly associated with contemporary atheism—Richard Dawkins, Christopher Hitchens, Daniel Dennett and Victor Stenger—are all male, white and, well, kinda old (69, 61, 68 and 75). Sam Harris, another popular figure who bears mention, has the distinction of being in his early 40s.

There’s no official definition of New Atheism, but the general consensus is that while atheists were once content to not believe in God by themselves, “new” atheists are determined to proselytize so that others join their disbelief. They can’t abide by tolerance of religion, because religion is so insidious a force as to warrant constant criticism. Though they dare not hope for eradication of religion outright, they have expressed the wish that a belief in God become “too embarrassing” for most people to admit.

Given the immense harm many organized religions inflict on women through outright violence and institutional oppression, it seems women may have more to gain than men from exiting their faith. Yet no women are currently recognized as leaders or even mentioned as a force within the movement. The lack of lady presence is so visible that Conservapedia commented on it by noting that Dawkins’ website overwhelmingly attracts male visitors.

One study-supported theory is that there simply aren’t as many female atheists as there are male, while another is that new atheism is “off-putting” to women. Earlier this year, journalist Sarah McKenzie suggested that women aren’t socialized to defend their beliefs with the same vigorous and “militant” zeal expected of atheists, and proposed that the movement make space for traditionally feminine characteristics like “story-telling [and] empathy.”

McKenzie’s article garned much less backlash than a similar piece by Stephen Prothero, who irritated female unbelievers with his call to promote the “friendly” and “gentler” voices of faith-abstaining women. Atheist Ophelia Benson criticized Prothero’s assertion that women are “more apt to tell stories[…] than to argue” as being dangerously close to relegating women to “weakness and passivity.”  In the Washington Post, Susan Jacoby tackled a few myths about atheism while expressing unhappiness with “Prothero’s view [that the movement consists] mainly of Angry White Men.” But the predominance of white male voices is one point Jacoby couldn’t and didn’t refute.

A quick search for female atheists will pull up such depressing fare as  “Dating Atheist Single Women” and  “Top 10 Sexiest Female Atheists.” (There is also a list for atheist males.) Unfortunately, such an overtly sexist mentality is in abundance; the loudest complaints about the absence of atheist women seems to come from atheist males who want non-believing girlfriends. In one unintentionally hilarious and cringe-inducing post, a blogger’s musings on the small pool of atheist women devolve into racy pictures of actresses with helpful points like “I happen to like petite girls, but a lot of guys are into more curves,” and “I don’t know who this girl is, but she’s redheaded and hot” alongside a picture of a paid model clad in a “Thank God I’m an Atheist” t-shirt.

Progressive bloggers have pointed out that prejudice is a major problem within the movement, but few mainstream articles have gone as far to suggest that sexism, let alone racism, among atheist males might be a factor in keeping women away. One rarely addressed aspect online and in print is the preponderance of scientists, particularly evolutionary biologists, whose rhetoric can occasionally become reductionist and cliched. (Daniel Dennett, one of the aforementioned movement luminaries, implied that women’s “biology” is the reason for their exclusion from church hierarchies, as opposed to the churches’ stigmatization of that biology.)

Christopher Hitchens, the only non-scientist of the high profile bunch, is notorious for inviting accusations of misogyny and racism by alleging that women are fundamentally unfunny and referring to Wanda Sykes as “the black dyke.” American Atheists, an organization founded by a woman, appears to have entered an era of leadership primarily provided by white males. They also overwhelmingly favor white men for their magazine covers and everyone with a picture on the website, male or female, is white.

Of course, atheist women do exist, as do atheists of color, and at least one (Ayaan Hirsi Ali) has written a best-selling book. Yet since the long-gone days of Madalyn Murray O’Hare (once the best-known U.S. atheist), none have the visibility and name-recognition of Hitchens and Dawkins. Sadly, there’s little indication that atheists are receptive to the suggestion that they might benefit from diversifying in color or gender. But unless they commit to fostering true inclusivity, they may continue to invite “deconverts” with one hand while pushing many away with another.