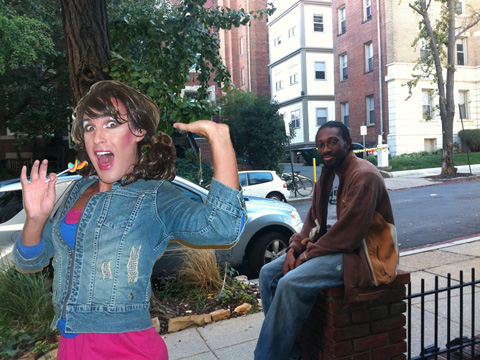 Social justice advocates are often accused of exaggerating the oppression faced by marginalized people. In fact, hierarchies of bodies (thin over fat, cisgender over transgender, white over brown) are reinforced daily. That process is so common it has become nearly invisible to those not directly affected by it–but now, helpfully, Apple has provided us with an outrageous example!

Apple, which has a notoriously lengthy approval process for its mobile applications, recently released the “PeekaBoo Tranny” app.

This app inserts an image of a supposed “tranny” into a user’s photo (always a transwoman). To stave off boredom, one has the option of purchasing multiple “trannies”.” Now that’s inclusivity. PeekaBoo Tranny even has a twitter page.

Bill Browning of blog The Bilerico Project explained how the app was approved:

This one made it through the process, but a dictionary was blocked temporarily for including definitions for curse words, and they still mark most LGBT apps as “contain age-restricted material” that requires you to put in your password to “prove” you’re over the age of 17.

Shortly after Browning’s article and an official complaint by GLAAD, Apple decided to remove the highly problematic application. But no formal apology followed.

Tranny is a pejorative and its only purpose is to dehumanize trans people. Though there is some debate in the trans community about reclaiming this word, a discussion of this nature is only possible because it is reasonably understood that tranny is perceived as a marker of outgroup status, much like the N word.

Moreover, this app specifically implied that one can spot a trans person, which is based on preconceived notions of what a trangression of the gender binary looks like. Unlike people who are cisgender, trans people are continually asked to prove their identity, while being held to a standard specifically created for them to fail. This standard is rooted in cissexism, which Lisa Harney defines as “the assumption that your sex, your gender are superior and more valid than trans people’s sex and gender.” Inserting a cisgender woman into the average picture would not give rise to amusement or give cause for derision because cis bodies are normalized, expected and respected. Gender is only considered comical when it involves trans people, because their identities are not understood to be real; trans identities are seen as artificial and self-constructed.

The glaring problem with transphobic actions such as this ill-advised app is that such dehumanization leads to violence: Thinking of someone as less-than-human helps rationalize hurting them. Though trans people have made great strides, (such as Amanda Simpson, who became one of the first presidential appointees to the federal government), they face high rates of violence. The Transgender Day of Remembrance, which occurs every November 2oth, commemorates those who have lost their lives due to anti-trans violence.

When Apple approved the PeekaBoo Tranny app, they did not think of the larger ramifications, because the costs of transphobia are always paid by trans people. No apology could ever really erase their actions, but the fact that they didn’t even attempt to really address the transphobia that they engaged in, evidences that they have not learned from this experience.

Image via The Bilerico Project, used with permission.