'Women for Sale': An Israeli Campaign Against Trafficking - Ms. Magazine
Skip to content 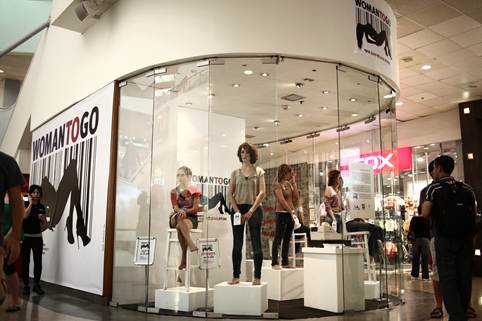 If you were in Tel Aviv a couple of weeks ago, chances are you might have done a double-take as you passed by a certain shopping center storefront. Instead of using mannequins to sell clothing items, there were live models on display–perhaps a more natural way to show off the attire. But then, if you looked closer, the price tags weren’t clipped to their clothes: They were attached to the women’s wrists.

“Women to Go” is actually an Israeli activist campaign created  to raise awareness about human trafficking. Its in-your-face tactic was meant to shock, and while not everybody has agreed on the method, few can dispute its effectiveness in terms of attracting attention: The campaign has been covered by media outlets worldwide, including a front page feature on CNN.com.

I recently had the opportunity to talk with Kayla Zecher, one of the campaign’s members, who answered a few of my questions:

Firstly, could you please tell me a bit about your organization?

The Task Force on Human Trafficking is a collaborative effort between an organization called ATZUM and the [Kabiri-Nevo-Keidar] KNK law firm. ATZUM focuses on a number of social justice issues in Israel besides human trafficking, including work with survivors of terror, righteous among the nations who are residing in Israel (those who saved Jews during the Holocaust) and the children of Ethiopian prisoners of Zion.

What is the legislation that you are pressuring the Israeli justice ministry to pass?

[It would] replicate legislation that has been successful in decreasing sex trafficking in Sweden. The legislation focuses on criminalizing the customer of the prostitute. We hope that decreasing the demand will decrease the number of women brought into Israel.

How close is the passing of the legislation to becoming a reality?

MK [member of the Knesset] Orit Zuaretz introduced it in 2009, and with our help we are lobbying the Minister of Justice to support it as well. It is a continual effort, but we are progressing.

What gave you the idea to put a woman in a storefront window as a way of raising awareness about sex-trafficking in Israel?

The shocking campaign was designed by the advertising agency Shalmor to depict a shocking phenomenon. Prostitution and the violent objectification of women are often unseen by the public.  The display forced the issue into the public space, at eye level, making it impossible for bystanders to pretend the problem doesn’t exist.

What has been the local public response to this campaign?

There was a mixed response, as expected. Most women signed [our petition] immediately. However, the view that women are not always the victim in this situation still exists. So we did come across people who disagreed with how and why we were doing what we were doing.

This story has now been covered on an international scale. Did you think that it would blow up to such a great magnitude?

We weren’t sure what to expect, but are gratified that it got the kind of attention that it did. It has added enormous energy to our drive to end sex trafficking in Israel.

Is this the first public campaign that you have done?

We have had several letter-writing campaigns in the past. In addition, the Task Force on Human Trafficking recently submitted a petition to the Supreme Court against advertising work for women in the sex industry in newspapers.

Do you feel that you have been successful?

Yes. We measure success by raising awareness, so that more people will know that this exists and hopefully this awareness will prevent girls and boys from being swept into the industry.

What next steps in your campaign are you taking and what are your future projects?

We have several other simultaneous campaigns going on, including a letter campaign. Most importantly, we are trying to get this trafficking legislation passed. We are focusing on reaching out to Knesset members and letting them know that this was our campaign so they will show more support in the future. We have a conference coming up in January in collaboration with the International Organization for Migration (IOM) called CREATE–Conference of Religious Educators Against Trafficking and Exploitation. In addition, we have a mission coming from America and Canada with abolitionists and activists on human trafficking issues to lobby the Israeli government to adopt this bill.