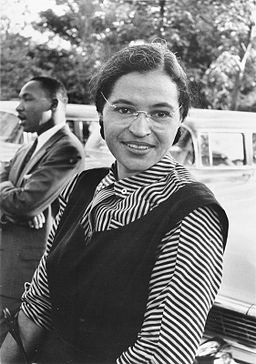 Fifty-five years ago today, Rosa Parks refused to give up her seat on an Alabama bus to a white man, as was required by Alabama law at the time. She was arrested and fined, which sparked a 13-month boycott against the Montgomery bus system that nearly bankrupted the bus company and led to a 1956 Supreme Court overruling of the discriminatory Alabama law. Many, however misguidedly, credit this as the beginning of the Civil Rights era.

This is the sanitized story we all learn in grade school, when “frail” Rosa Parks, the icon of passive resistance, is etched into our impressionable young minds. (Anyone else remember hearing their 4th-grade teacher ask, “What do you think, was she really an activist, or was she just too tired to stand up that day?’). What is less known is that she was already a badass activist involved in a collective battle for civil rights long before that December day. According to Mother Jones:

Parks had been active for 12 years in the local NAACP chapter, serving as its secretary. The summer before her arrest, she’d attended a ten-day training session at Tennessee’s labor and civil rights organizing school, the Highlander Center, where she’d met an older generation of civil rights activists … During this period of involvement and education, Parks had become familiar with previous challenges to segregation: Another Montgomery bus boycott, 50 years earlier, successfully eased some restrictions; a bus boycott in Baton Rouge won limited gains two years before Parks was arrested; and the previous spring, a young Montgomery woman had also refused to move to the back of the bus, causing the NAACP to consider a legal challenge until it turned out that she was unmarried and pregnant, and therefore a poor symbol for a campaign. In short, Rosa Parks didn’t make a spur-of-the-moment decision.

Placing Parks into the context of the wider social context does not belittle her actions: In fact, when put into the context of the murder of Emmet Till and the murder of the three civil rights activists in 1964 her story is even stronger. The portrait of Rosa Parks as a solitary actor does society a disservice. What we learn from delving deeper into her past is not only that she was truly dedicated to her cause but that, through community, every one of us can find the courage to become an activist for the cause we hold most dear.

Rosa Parks died on October 24, 2005, and the world has been missing her ever since.