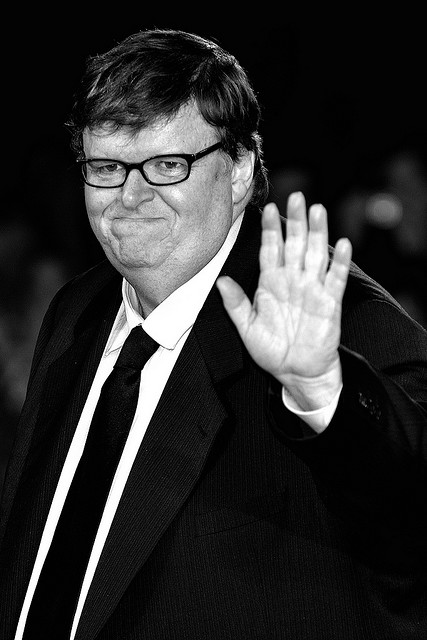 Michael Moore has made a career of standing up, as a gutsy average guy, to corporate power in the United States. Last week he inspired feminists to give him a taste of his own medicine online.

Appearing on MSNBC’s Countdown with Keith Olbermann, Moore (along with the host) summarily dismissed the sexual assault allegations against Julian Assange, the man behind Wikileaks. Moore (see transcript) called the allegations “all a bunch of hooey,” and repeated the rumor (debunked by Jessica Valenti and others) that the charge against Assange is merely that “his condom broke during consensual sex.” Moore is so eager to defend Assange that he blogged about posting bail money for him.

#MooreandMe is feminist blogger Sady Doyle’s campaign to take Moore to task on this issue. As in Moore’s documentary Roger and Me, she wants to hold The Man accountable to the “little guy”–except that now, given his rape apologism, Moore has become The Man and the little guy is women. (By the way, if you’re not up on it yet, the “#” is a hashtag, used in Twitter to collect tweets on a subject and make them searchable.)

You may have seen the #MooreandMe phenomenon on Twitter, Salon and Jezebel; beautifully dissected by Kate Harding (twice); or on Tiger Beatdown, where Doyle started it all and is continuing the drumbeat with several follow-up posts.

The first step of the #MooreandMe campaign was to call out Moore and inform him that to mock accusations of sexual assault is to participate in rape culture. (What is rape culture?  Check the exhaustive illustration by Melissa McEwan at Shakesville). Assault survivors pointed out the fear involved in making an accusation of sexual assault, particularly against someone popular. Olbermann and Moore just reinforced those fears.

The second step Doyle took was to call on Moore to donate the same amount he gave for Assange’s bail–$20,000–to an organization that combats sexual assault and helps survivors. Moore has shown no signs of being receptive to the criticism not being willing to make a comparable donation. Instead, he has just written a general post about sexual assault in Sweden. “Hey, look over there!” is a classic way of deflecting criticism. As sociologist Barry Glassner shows, the art of misdirection isn’t just for magicians.

The idea for the donation was to make a gesture of support for victims of assault. Since Moore hasn’t done it, Doyle decided that she and her followers would make the gesture themselves. In the words of Lily Tomlin:

I said ‘Somebody should do something about that.’ Then I realized I am somebody.

So this has been the third step: thousands of dollars have been raised and donated by the “little guy” activists to RAINN (Rape, Abuse & Incest National Network) and similar organizations.

I applaud Sady Doyle for her campaign, which succeeded so well and so quickly. She has made an important contribution by exposing sexism within the progressive movement, speaking up on behalf of assault survivors and demonstrating feminist activism and bringing more people on-board. Some Tiger Beatdown readers had never ventured to Twitter until motivated by #MooreandMe.

But Dolye has also experienced an unfortunate backlash: She’s been harassed online, cursed out and reportedly some people have even exposed her personal offline information.  I can’t fathom the loyalty to Moore that would inspire that. It only makes sense in the context of misogyny, and I admire Doyle’s strength in standing up to it.

She writes, four days into the action:

No matter what they do to me, no matter how long Michael Moore ignores me, I am still going to be here outside the tower. At this point, if you want to fucking stop me from demanding that apology, you will have to get a gun and literally shoot me down. And if I survive that, I’m Tweeting from the hospital.

Apart from the misogynists, the #MooreandMe campaign does have detractors within the left. Perhaps for Moore and his allies like Keith Olbermann, gender issues always come second (or third) to issues of class inequality. But I disagree. I don’t insist that fellow progressives share my own priorities, but they should respect gender-based issues. If they instead aid the oppressors, we’re never going to get very far. Remember Stupak? There’s no reason women should stand for being pawns or collateral damage in men’s politics.

Recently, someone (twitter.com/SnarkysMachine) pointed out that RAINN has some record of transphobia. Did Doyle block Snarky’s? No. Did she dodge the criticism with misdirection, like Moore did? No. Doyle tweeted and posted a link to Trans friendly resources [PDF] after a constructive dialogue with Snarky’s. Imagine that. Yet another reason to applaud her.