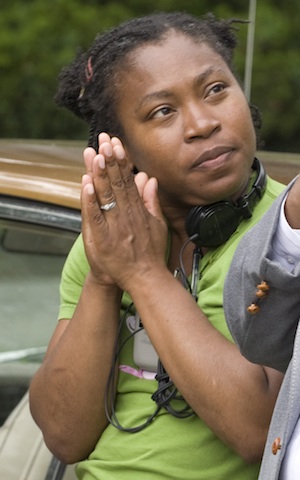 “What we remember about the [Black Panther Party] is sort of like ‘sexy black men with guns,’” Tanya Hamilton (left), writer and director of the Indie Spirit Award-nominated new film Night Catches Us, told Fresh Air’s Terry Gross in a recent interview.

Few people know about women’s leadership in the Party’s education and free breakfast programs for children. Even fewer are aware that Elaine Brown chaired the party for three years in Huey Newton’s absence and used her authority to place other women in leadership positions and to combat the sexist behavior of male party members.

Hamilton had those women in mind when she created Patricia “Patti” Wilson (Kerry Washington), the female lead of her debut film Night Catches Us. Set in 1976 Philadelphia, the film witnesses the ruins of a movement. Ex-Panther Patti, an attorney, is raising a precocious daughter, Iris (Jamara Griffin), on her own after her husband’s murder by the Philadelphia police. She refuses to talk about the painful past but still lives in the house where her husband was shot.

Hamilton considers Patti “the most complicated character” in the predominantly male-cast film. “A lot of the women I think were kind of the backbone [of the movement],” she said in an interview with Michel Martin. Patti remains the backbone of her community by bailing young men out of jail and raising money for their defense. When former Panther Marcus (Anthony Mackie) returns to Philly after a mysterious four-year absence, Patti is the only one who believes he’s not a snitch.

“I wanted to try to make a film [that] looked at people who were struggling in the aftermath, in a way, of a war, even though it’s an abstract kind of an idea. But just that the war of that kind of black power struggle was on their streets and in their neighborhoods,” Hamilton says. The war’s aftermath has left boys, like Patti’s cousin Jimmy (Amari Cheatom), and men, like Panther-turned-bar owner Dwayne “DoRight” Miller (Jamie Hector), with unchannelled rage, easy access to guns and seemingly nothing else left to lose.

But that’s not the only kind of black masculinity the film showcases. Mackie’s character fills a void in portrayals of black fatherhood (and black manhood) as affectionate and tender. The scenes between Marcus and 10-year-old Iris are some of the most powerful in the film. In a quiet and haunting moment, Iris tells Marcus, “They’re all around us. Ghosts. They’re everywhere.” In response, Marcus helps Iris begin to exorcise some of those ghosts by illuminating the past and temporarily filling the emotional void left by her father.

Although Night Catches Us, like most “war” films, focuses a great deal on male characters, it doesn’t share the genre’s usual macho trappings–big explosions, fast pace, male bonding. Hamilton’s keen attention to minutia and everydayness provides a strong example of how women directors can produce feminist films out of presumably masculine subject matter. After Kathryn Bigelow’s historic Oscar win last year, Salon.com’s Martha Nochimson questioned whether Bigelow was a feminist pioneer or a tough guy in drag. Calling Bigelow the “Transvestite of Directors,” Nochimson charged the The Hurt Locker director with “masquerading as the baddest boy on the block to win the respect of an industry still so hobbled by gender-specific tunnel vision that it has trouble admiring anything but filmmaking soaked in a reduced notion of masculinity.” In stark contrast, Hamilton brings emotional depth and acuity to an era usually fetishized with depictions of overblown, tough-guy black masculinity.

Night Catches Us is playing in selected art house theaters and is available On Demand from Amazon.com and some cable services.