Economic Recovery? Not So Much for Women - Ms. Magazine
Skip to content 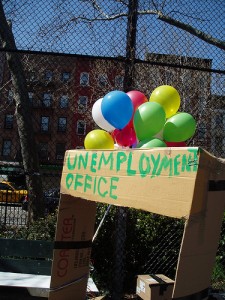 The latest employment figures place the economic “recovery” firmly on the Y chromosome. According to the National Women’s Law Center, the unemployment crisis declined for men in 2010–but grew for women.

From January to December 2010, federal data shows that unemployment among women ticked up from 7.8 percent to 8.1 percent, while the rate for men dipped from 10 percent to 9.4 percent. All those figures are, of course, pretty dismal, and overall unemployment during the recession has been proportionally higher for men.

Still, the divergent employment trends in 2010 indicate that the  recovery period will fail to address or even widen gender gaps in economic opportunity. The recovery certainly looks different from the bottom end, as the NWLC reports:

The gaps are even wider when you parse the statistics by race and gender:

After enduring the Great Recession, why do women get stuck with such a Tiny Recovery? The answer could lie in a delayed reaction in certain segments of the economy. The NWLC suspects that the anemic employment gains for women is tied to

the heavy job losses in the public sector, where women represent 57 percent of the labor force but lost a disproportionate 86 percent of the 220,000 jobs lost during 2010.

So it seems 2010 was when women began feeling the full onslaught of attacks on the public sector by politicians and the media—the bashing of teacher unions, the insistence among state officials that the budgets must be balanced on the backs of underpaid civil servants. And the data reveals that although women are overrepresented in the public sector, they suffer an even more disproportionate rate of job loss. Those losses could worsen as budget cuts kick in and federal stimulus funds, which had been used to prop up government jobs, finally evaporate.

Another aspect of women’s job insecurity may be lower rates of unionization. The rate among employed women is 12.7 percent, according to federal data, compared to 14.4 percent for men. Unionization declines further down the age scale, too, so young women, with less work experience, could be in an even more precarious position.

At this pace, women and people of color won’t be able to “bounce back” any time soon. To deal with the chronic economic malaise behind the immediate crisis, disadvantaged and marginalized workers need more than recovery to get them to where they deserve to be: They need justice.