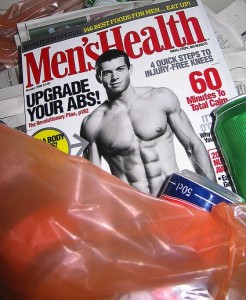 I was Stumble’ing the Internet over the weekend, alternating between pictures of puppies and pictures of kitties when StumbleUpon led me to something even better: the new Men’s Health Feminist blog.

Yeah, you read that right: Men’s Health magazine, full of “how to have better sex” and “how to lose the belly fat!” advice for men, has a blog for men about feminism. This unequivocally rocks for three reasons.

First, it’s a sign that the feminist blogosphere has moved into the mainstream. When feminist verticals like Broadsheet and Double X are either disappearing or folding back into their original publications, it’s a good indicator for the future that a mainstream popular men’s magazine has taken up the feminist cause.

Second, hopefully a blog like this can help de-stigmatize the label “feminist” for readers.  In her introductory post, the blogger Kiera Aaron shares an anecdote all too familiar to feminists:

Exhibit A: I lent my friend one of the Greatest Books of All Time, a critique on what the author labels “raunch culture” (think: Girls Gone Wild). When I eagerly asked her what she thought about the topic, she simply responded, “I just don’t identify with feminism. I don’t think I would be offended if a guy held the door open for me.”

Well, neither would I. (I mean, shouldn’t we hold doors open for everyone, anyway?)

But the point here is that she was looking for any excuse to avoid the feminist label. And thus, she picked an arbitrary stereotype (which wasn’t even mentioned in the book) and used it as a means to avoid the term. Phew. Crisis averted.

One can only hope that on a feminist blog for men, Aaron will do what she can to help erase the negative connotations of the term.

Finally, the blog could help bring men to the movement. For men, feminism and what it entails is rarely discussed outside of a historical context. How many guys do you remember taking your gender studies classes in college? At the feminist panels you go to over the weekend, how many men are in attendance? And can you blame them for not showing up in big numbers? Selfish as it may be, it’s admittedly hard to get worked up over a movement in which one doesn’t directly identify. But if a feminist blog from Men’s Health encourages them to change the way they watch a Kanye music video, then’s that’s a step in the right direction.

While the blog only has two posts up so far, we hope it lasts. We might not love every article on the Men’s Health website, but when something that’s usually bad, like most mass-marketed magazines, does something good, like spreading the feminist movement to an audience it doesn’t usually reach, it deserves our applause.