Lara Logan Should Have Stayed Home Because She is a "Mommy" - Ms. Magazine
Skip to content 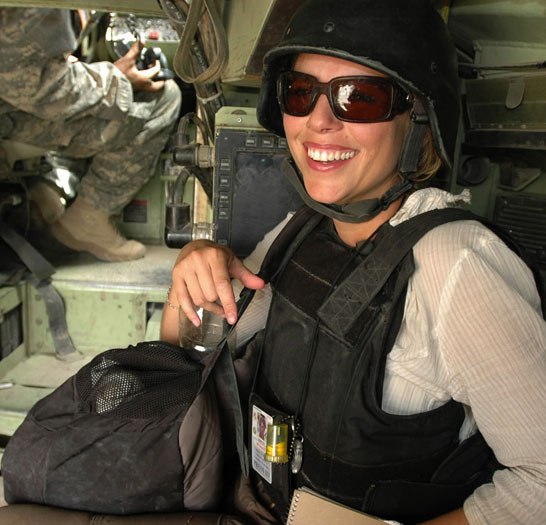 I have been following the story of Lara Logan and the horrible assault that she survived in Egypt.  I have read the articles about people questioning what she was wearing, the asserting that her “good looks” played a role in the assault, claiming that she deserved it because she was in a Muslim country (never mind that rape happens in North America)  and the debates that women reporting in that area represent a potential lawsuit to their employers. Each new round of misogyny and victim blaming has been difficult to read and until now I have found myself too triggered to write a response. But Peter Worthington of The Toronto Sun wrote a piece that so enraged me I decided that my silence is no longer acceptable.

In “Women with Young Kids Shouldn’t Be in War Zones,” Worthington suggests that mommy status means that women need to think of their children (typical conservative claptrap) and just stay home:

Apparently, against the advice of her bosses, Logan insisted on staying with the crew when they returned to Egypt.

It was the right thing for her to do journalistically—unless, of course, she had small children, which was the case. Her son (from a second marriage) was born in 2009 and should have taken precedent over her wishes to cover the world’s biggest story for the moment.

This holds true for any woman covering wars or revolutions.

Fine and commendable for, say, the Calgary Herald’s Michelle Lang to cover the Canadians’ war in Afghanistan, where she was killed during the first few days she was there. But she was single and prepared to take her chances. Were she the mother of small children, plain and simple she should not have been there.

I would argue the same should apply to mothers of young children who are in the army. They should not be in combat zones or away from their domestic responsibilities. A double-standard, perhaps, with men, but that’s the way it is. Or should be.

As I read this incredibly sexist assertion, I kept waiting for him to suggest that men had the same responsibility to put their children ahead of their careers, but of course that was just wishful thinking. The truth of the matter is that it takes a man and a woman to create a child, but it is only mothers who are set up with the narrative that they must be continually self-sacrificing. We appease women by claiming to celebrate Mother’s Day once a year, but this demands that women continually put aside their personal desires or ambitions. It depoliticizes motherhood and keeps women compliant.

Lara did not leave her child unattended; she left to do her job, just as male reporters have been doing for a very long time. Men calculate the risks before embarking on each trip and so do women–yet Worthington suggests that only women can fulfill the unique role of parenting and thus we belong at home in our own special gilded cage. It comes down to asserting that women don’t have the same rights to personhood that men do, rather than an attempt to elevate the role of mother. It enslaves women for using their choice to reproduce.

One need not leave the country to work in a job that is dangerous. Every day truckers drive highly explosive materials across the nation’s highways. These jobs are largely done by men. They receive hazard pay because the job is dangerous and yet I have not heard a suggestion that these men are not thinking about their children. Firefighters run into burning buildings when others run the opposite direction. Once again, patriarchal gender disparity means that this is yet another job largely done by men. We consider these men to be heroes, not risking their lives irresponsibly. The same can be said of law enforcement. It comes down to the fact that part of the discourse surrounding masculinity highly affirms taking risks. Boys are specifically raised to be adventurous and aggressive, while girls are prepared for motherhood with baby dolls to enforce a gender performance that is submissive.

I also believe that part of the angst regarding Lara’s rape is the fact that she is a white woman. Historically speaking, the hyper-feminization of the supposedly frail white woman has helped to limit opportunities offered to them, whereas no such concern is offered to women of color in similar situations. Consider the fact that when Jessica Lynch, a white female private first class was captured in Iraq, she quickly became a media darling, while Shoshana Nyree Johnson, the first Black female prisoner of war serving in the United States military, was quickly forgotten–even though a video of her being beaten by her captors was released to the public. Where was the concern that her womanhood should necessarily preclude such treatment? The fact of the matter is that, despite the suggestion that we now live in a post-racial world, Black women are resoundingly considered un-women who are unworthy of concern. When Worthington talks about women avoiding dangerous employment, he is really directing his commentary at white women, because they are overvalued at the expense of women of color. The rape of women of color continues to be ignored because our bodies have been socially constructed as available for assault, while white women continue to be assumed the property of white masculinity. The horror to many is not that Logan was raped and assaulted, but that it happened at the hands of men of color.

The conversation surrounding Logan’s rape serves as even more evidence that the fight for women’s rights needs to continue. We have yet to reach a state of gender parity if a woman’s motherhood can still be employed to trap her in her home. We have also failed to reach a state of racial equality, because the motherhood of women of color is not considered valuable. Men continue to dominate both national and international discourse, allowed to frame the narrative about women, our bodies and the various roles that we play in society.