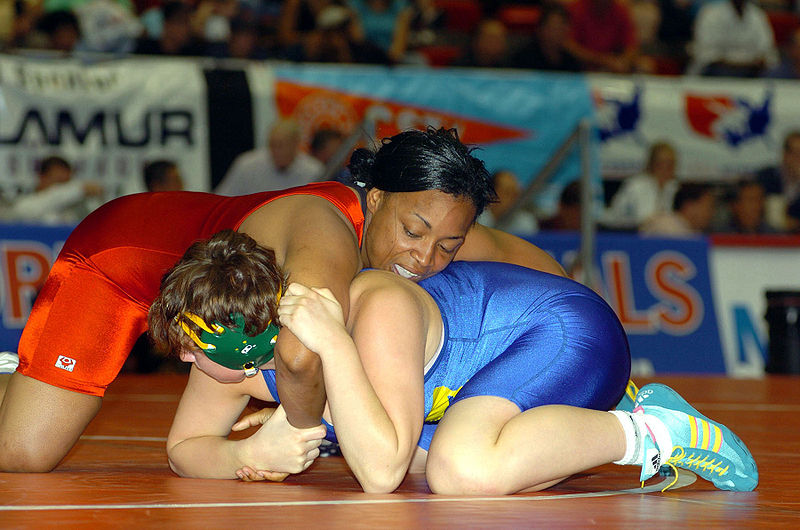 “Really? Girls wrestling with boys? Has feminism really lost its mind?” So goes the question from Catholic blogger Defend Us in Battle, writing about Joel Northrup’s decision to withdraw from the Iowa state wrestling tournament rather than compete with female opponent Cassy Herkelman.

Northrup’s withdrawal resulted in the first-ever win for a female at the tournament. However, Herkelman was denied the opportunity to actually wrestle for the win due to Northrup’s forfeit. Referencing his personal faith as the reason for his forfeit, Northrup stated:

As a matter of conscience and faith, I do not believe that it is appropriate for a boy to engage a girl in this manner. It is unfortunate that I have been placed in a situation not seen in most other high school sports in Iowa.

Females have been competing with boys on wrestling teams in Iowa for more than two decades. If Northrup’s beliefs translate into a personal conviction that he cannot wrestle against a female, then why is he wrestling in a state where wrestling is co-ed? Even more pertinent, why are so many championing his choice, framing him as a religious hero? If he had used religion to similarly state he could not wrestle against a person of color or a homosexual, would he still be applauded? Likely not.

I don’t wish to condemn this young male for his decision, especially as he may not have been given a choice of whether he would follow the patriarchal tenets of the faith his family follows. Rather, I would like to condemn the championing of this “choice” by news outlets and bloggers who fail to consider how this relates to Title IX, to the sexism still commonplace in sports and to the supposed separation of church and state. For example, this story names three key questions of the debate, none of which even obliquely refer to sexism or Title IX.

Northrup has been championed by many, particular many religious and/or MRA (men’s rights activists) bloggers, most of whom fail to recognize that his statements are not only about “faith” but also represent an implicit condemnation of Title IX, the 1972 amendment that states,

No person in the United States shall, on the basis of sex, be excluded from participation in, be denied the benefits of, or be subjected to discrimination under any education program or activity receiving Federal financial assistance…

Northrup goes further than using his faith as excuse: He suggests that such a “situation”–namely, girls competing equally in sports–is “unfortunate.” Yet Northrup is being framed as a “genuine” hero for his decision, as in this newspaper article, which goes to pains to note he has “four little sisters he adores.” (Yes, kind of like the “I’m not racist; I have a black friend” excuse.)

Another story from Mercury News frames Northrup as a heroic martyr who “found himself in a quandary no sophomore should ever have to face–paired against a girl in the state wrestling tournament.” According to author Gary Peterson, Northrup “did the only thing a gentleman could. He forfeited.” Yes, because competing with a female who worked just as hard to be there as he did, who has just as much dedication to her sport as he does, would be the coward’s way out, right? (Notice also the latent sexism in this author’s language: Herkelman is a “girl” while Northrup is a “gentleman.”)

Peterson then suggests we “shoot a raised eyebrow at the Iowa High School Athletic Association” for not recognizing that:

there are plenty of sports in which men and women can compete together as well as against one another on more or less equal and nonthreatening terms–golf, tennis, bowling, Pictionary.

Bloggers on the religious right, such as Defend Us in Battle, also argue that this story is not about sex/gender, but rather, “about conscience and faith.” Not surprisingly, Defend Us offers the huge generalization that “feminist-liberal school officials don’t care about things like conscience or faith,” equating this story with claims that feminism promotes violence against women (!), goes against god and/or is bringing about the ruination of humanity. Wow, all because a young female with great skill as a wrestler threatened the faith of a male. If one’s faith is that tenuous, perhaps one should not be competing in wrestling in the first place?

Alas, as Defund Us notes, such sports can be “intimate and touchy.” Gasp.

I just don’t think boys and girls should compete against each other in most sports, especially ones like wrestling where the physical contact is so intimate and touchy. Yes, I know gay boys probably compete, but they are the ones having to make the decision and deal with any uncomfortableness.

Here, the author suggests that “gay boys” can make such decisions and “deal with any uncomfortableness” but that girls (regardless of sexual orientation) cannot. Hmmm.

Deep inside every man is a sense of wildness, a rugged ‘warrior’ drive and our natural inclination towards adventure.  There’s nothing natural inside a man that says ‘I should [sic] my brute strength to pin a woman to the floor to win a tournament.’

True Manhood goes on to write:

It’s not authentically feminine for women to do things men are naturally inclined to do … It’s not about some notion of equality that a woman should be able to do whatever a man can do.  It’s about the notion of order.

He ends with a call to “TrueMan up!” Excuse me while I vomit up my latte.

It’s about order?!? As in the “divine right” of male rule? Yes, because the world would clearly fall apart if females wrestle males–next thing you know, those little ladies might want to vote and such!

Meanwhile, as Northrup is granted sainthood on the Internet, the achievements of Megan Black and Cassy Herkelman–the two girls who made history by qualifying for the Wrestling championship this year–have been relatively silenced. So it’s up to those of us on the side of gender equity and fairness in sports (let alone the separation of church and state) to salute the first female win in the Iowa State Wrestling Championship! To those of you shouting the “True Man Up” chorus, your thunderous support of Northrup is insulting to the young females who earned their spot in the tournament in the same way as all those with a rugged warrior drive.