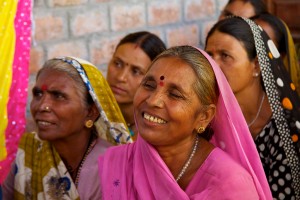 In countries rich and poor alike, the burden of struggling to make ends meet often falls on the woman of the household, who in turn has to stretch resources in the face of income inequality and gender discrimination. As hunger intensifies in the most disadvantaged communities, however, women who’ve long been ignored as providers are finally gaining some recognition as part of the solution.

The Institute for Agriculture and Trade Policy (IATP) has documented how an unlikely group of heroines in India representing the poorest of the poor–The Tamilnadu Women’s Collective–have emerged at the frontlines of the struggle against interlocked social crises and food crises across the Global South.

The Women’s Collective, with about 150,000 members spread across 1,500 villages in Tamilnadu, India, shows how an organization based on fulfilling women’s economic needs ends up extending into all aspects of the lives of the poor:

The Tamilnadu Women’s Collective trained themselves in coun­seling, and initially provided legal aid for women who were victims of domestic violence. Later on they expanded this work to support women by taking up cases of sexual harass­ment (and, once, murder) against upper castes and landlords. … In 1997, a shelter was opened to house women who were fleeing abusive relation­ships, were victims of violence or were destitute or single. Many of their clients have become active members of the “sangams” (village-level women’s collectives), joined as staff or have emerged as leaders in the state-level organization.

Contrary to stereotypes, women in places such as rural India are heavily involved in farming as well as in securing access to clean water, both of which are increasingly difficult due to pollution and land degradation. Environmental problems, including climate change, also routinely expose these women to disease, domestic violence and economic oppression—not to mention the current explosion of political unrest due to the crippling cost of living.

In the IATP report, author Shiney Varghese describes features of a gender-focused food and agricultural policy: political empowerment of women, both in the home and in the broader society; women’s democratic political participation and a movement toward sustainable “multifunctional agriculture”–an approach that draws from indigenous practices.

And here’s the connection between women’s rights and food security: More political power for women means more capacity to deal with hardship, more respect from peers and authority figures and greater control over household finances and the use of community resources. The report notes, “Women’s role in household-level decision-making influences their and their family members’ food and water security, irrespective of income levels,” in part because women can steer critical decisions such as which crops to plant.

The problem lies in the gap between official development plans and the people and resources on the ground. Varghese notes that even “sustainability” oriented programs, like the promotion of engineered “climate ready seeds,” may be implemented without a full scientific understanding of the consequences for local habitats and societies.

While modern farm technology has dramatically boosted productivity worldwide, the Women’s Collective took a different approach, departing from industry-backed “Green Revolution” crops to focus on resilient local harvests. The women have worked collectively to identify vital seed varieties and store them as their communities’ traditional buffer against future disasters and climate volatility. The next step is wholesale reorientation of their land toward traditional farming rather than the “modern” pesticide-heavy techniques that have alienated many local producers.

According to the IATP:

Proponents of modernization of agriculture argue that traditional farming practices condemn farmers to hunger. Yet the experiences of the Tamilnadu Women’s Collective show that innovative approaches such as natural farming, which are grounded on traditional farming systems, may offer satisfactory solutions.

Traditional agriculture methods in many cases turn out to use water more efficiently than modern techniques do. Farmers are also encouraged to use water-conserving manure fertilizer instead of hazardous chemicals. A system of balancing production across multiple crops ensures diversity and greater stability.

Beyond this year’s harvest, the Women’s Collective has organized to press for food policy reforms, too. As producers, they want to revamp the government’s subsidized food distribution program to be more fair to struggling local farmers. As community members, they’ve criticized industry-friendly fertilizer policies that constrain access to more traditional, ecologically sound methods.

In a world of devastating hunger and chaotic excess, women are clearing an overlooked path toward a more just environmental balance. The Tamilnadu Women’s Collective has discovered that, despite poverty and discrimination, they leverage one indomitable form of power in their communities: No one can eat without them.