Redefining Marriage By Getting Rid of It? - Ms. Magazine
Skip to content 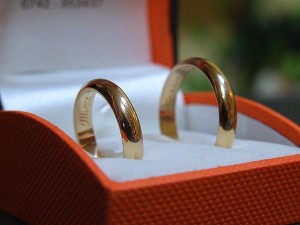 Introduced in January in the New Hampshire House of Representatives, HB569 would get rid of marriage. Sort of.

To be exact, the proposed bill, currently in committee, privatizes marriage. The New Hampshire state government would no longer issue marriage licenses; instead, it would grant domestic partnerships. If you wanted to get married in the traditional sense, you’d go to your religious house of choice. If you wanted the legal benefits of marriage as it currently stands, you’d get a domestic partnership. And all this would apply to gay and straight couples alike.

A group of Republican members of the New Hampshire state house proposed the bill, coming from the libertarian position that marriage is a contract:

that should be recognized and applied by the courts, but that the government has no business, in general, decreeing who may or may not make the contract or imposing any prior conditions, as licensure does.

Is this where American marriages are heading? Is this the best solution to the same-sex marriage debate?

On one hand, the government has a monopoly on marriage, and government-sanctioned marriages have been disintegrating for years—just look at the divorce rate in the United States [PDF]. Since all 50 states issue no-fault divorces, it’s sometimes easier to end a marriage than it is to end a corporate partnership.

David Boaz explained the benefits of privatized marriage for both heterosexual and homosexual couples in his 1997 Slate article:

Make it a private contract between two individuals. If they wanted to contract for a traditional breadwinner/homemaker setup, with specified rules for property and alimony in the event of divorce, they could do so. … Marriage contracts could be as individually tailored as other contracts are in our diverse capitalist world…

And what of gay marriage? Privatization of the institution would allow gay people to marry the way other people do: individually, privately, contractually, with whatever ceremony they might choose in the presence of family, friends or God. Gay people are already holding such ceremonies, of course, but their contracts are not always recognized by the courts and do not qualify them for the 1,049 federal laws that the General Accounting Office says recognize marital status.

Those who consider the word “marriage” to carry great importance can still get married; the institution would just belong to religious organizations (as it originally did) instead of the government. If a church or synagogue or mosque chose to bless a union, they would be free to do so. Marriage would not be eradicated; in fact, it might become more spiritually meaningful. Today, marriage licenses have become meaningless in terms of what Stephanie Coontz called “interpersonal responsibilities;” after all, in 2008 almost 30 percent [PDF] of all households were single-parent homes, a 10 percent increase since 1980. Coontz writes:

As Nancy Polikoff, an American University law professor, argues, the marriage license no longer draws reasonable dividing lines regarding which adult obligations and rights merit state protection. A woman married to a man for just nine months gets Social Security survivor’s benefits when he dies. But a woman living for 19 years with a man to whom she isn’t married is left without government support, even if her presence helped him hold down a full-time job and pay Social Security taxes. A newly married wife or husband can take leave from work to care for a spouse, or sue for a partner’s wrongful death. But unmarried couples typically cannot, no matter how long they have pooled their resources and how faithfully they have kept their commitments.

That marriages currently take place under the auspices of religion presents its own issue. When a member of the clergy marries a couple, he or she does so under the power of the law, essentially acting as a representative of the government. So when a church refuses to marry a gay couple, conflict could arise as to whether the church is acting as a representative of government (as it does when dealing with marriage) or as a religious organization. A 2007 position paper by the secular think-tank Center for Inquiry explored this issue, along with other issues relating to same-sex marriage, and argues that state-endorsement for domestic partnership is the best possible solution with regards to the separation of church and state, though they argue LGBTQ couples should be granted equal marriage rights so long as the state sanctions marriages.

Gay couples may actually be the ones most resistance to having domestic partnerships replace “marriage” on a legal level. Time magazine pointed this out after the California Supreme Court ruled against the ban on gay marriage:

After all, what was the most sweeping part of the May 2008 decision Ming and his colleagues issued that granted gays the right to marry? It was the idea that the word marriage is so strong that denying it to gay couples violates the most sacred right enshrined in the state constitution: the right for all people to be treated with dignity and fairness. Just 10 months later, gay couples–whether or not they are among the 18,000 who married in the state before Prop 8 stopped the ceremonies–are loath to lose a word for which so many fought so hard and so long to have apply to themselves.

If the government no longer marries people, it cannot control who can and can’t get married, so the argument about gay marriage becomes irrelevant–the legal rights and protections of “marriage” are no longer at stake. Domestic partnership may still have conditions and qualifications, but the “sacred institution of marriage” loses its legal definition and with that the legal requirements necessary to enter it. Whether or not that’s a good thing is up for discussion.