What Happened on March 8 in Tahrir Square - Ms. Magazine
Skip to content 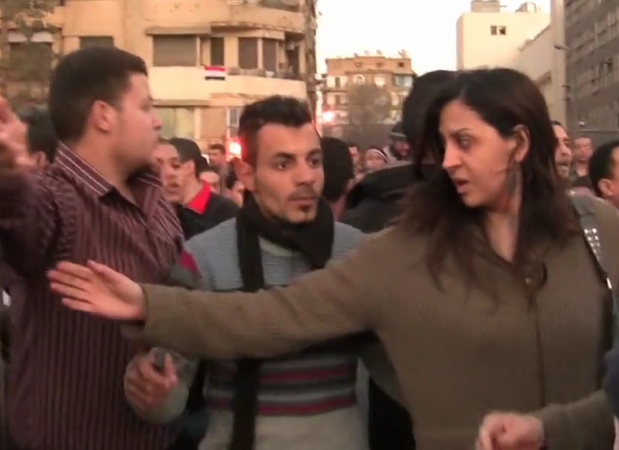 Several hundred women gathered in Cairo’s Tahrir Square for International Women’s Day on Tuesday, demanding equal rights in a “new Egypt.” But the event–part celebration, part demonstration–soon turned violent when throngs of men arrived to harass the women. As a U.S. Fulbright fellow in Egypt, I was able to digitally record what happened (video below).

Reporting of that day has focused on the subsequent clashes between Christian and Muslim men. But what I saw first were men intent on breaking up the women’s protest. “Go home,” one sheik, hoisted on the shoulders of another man, told women. Others shouted slogans such as “Not valid!” that had been used against Mubarak in the same space just weeks earlier. One man held up a sign reading “Not now,” arguing to me that the demonstrations were “instruments of the West.”

Amira Khalil, 22, was pulled away from her group of friends at the march, verbally attacked and groped by several men. One of her male friends came to her aid, shaking with anger.

Here is footage of the scene:

Not all men were there to disrupt the march. Shereef Abbas, 32, went to show his support for women. “I’m still sad how this turned out–I haven’t absorbed it yet, this is shocking,” he said, while looking at demonstration material that had been crumbled and torn. “This will hinder the progress we’re trying to create in Egypt, a true democracy. This segment of people will be an obstacle in turning people running around.”

Although the movement that ended a dictator’s 30-year reign in just 18 breathtaking days was not driven by feminist concerns, women were a significant presence in the street protests. In the weeks following, many have said that the empowerment they felt during the demonstrations should be used to effect change for women themselves.

We run the risk of being forgotten. And today showed us more than ever, we can’t fall into this trap. We need to struggle and fight.

She has lobbied for decades to have women included in important governmental committees. But as recently as last week, efforts were clearly lagging. The Supreme Council of the Armed Forces appointed a committee to amend the country’s constitution, but not one woman was included.

Bibars and other activists say in the coming days they plan to reorganize and develop cohesive strategies. For instance, Nehad Abu El Komsan, chairwoman for the Egyptian Center for Women’s Rights, said the organization is hosting a social media seminar this weekend.

But Rana Korayem, 25, graduate student at the American University in Cairo, says organization won’t counteract all the forces that pushed them out of the square on Tuesday. “When I informed some of my friends I was going, they were like ‘Rana, why? You have all your rights,’” she said, noting that people have been leaving disparaging comments on her Facebook wall. “Many women, including many of my friends, accept their roles,” she said. “They don’t think they should be involved in society.”

Activist Hind el-Hinnawy, who became a national symbol of women’s defiance when she filed a patrimony suit against a famous Egyptian actor, was in the square with her father. “In Egypt, everything is a struggle for women,” Hinnawy’s father said. “We hope this will change, but it will take time.”