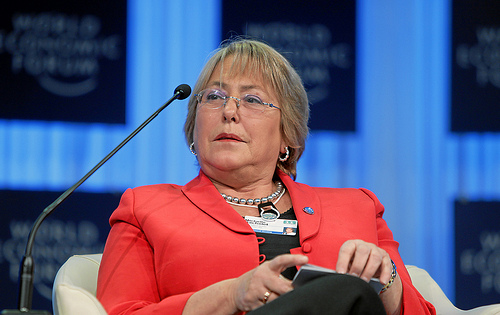 Egyptian and Tunisian women’s role in post-revolutionary governments was a major concern at the high-powered “Women in the World” summit this past weekend, hosted by Newsweek and Daily Beast editor Tina Brown. Speakers such as Melinda Gates, Madeline Albright and Melanne Verveer devoted three days to discussing the importance of investing in women worldwide.

After standing side-by-side with men in Tahrir Square, women in Egypt have been shut out of all discussions on democracy in Egypt: To date, no women have been appointed to the transitional council. At a March 8 International Women’s Day rally, women were met with violence and harassment. But Egyptian feminists such as Dr. Nawal El Saadawi, a writer, activist and physician who spoke at the conference, are mobilizing other women online and refuse to give up. “Women’s rights must be achieved,” she said at a “Women in the World” panel discussion Thursday.

They will have powerful allies. In her keynote address, U.S. Secretary of State Hillary Clinton, announced that when she travels to Egypt and Tunisia this week to meet with transition leaders, “The United States will stand firmly for the proposition that women deserve a voice and vote, and they deserve to be sitting at every table in their society.”

She echoed these sentiments in a Newsweek cover story last week (new editor-in-chief Tina Brown’s inaugural issue, timed to coincide with the conference). “We believe that women were in Tahrir Square, and they should be part of the decision-making process,” Clinton told interviewer Gayle Lemmon. “If [the Egyptians] are truly going to have a democracy, they can’t leave out half the population.”

Also heading to Egypt and Tunisia to lobby for women will be former Chilean president Michelle Bachelet, now Under Secretary-General and executive director of UN Women, a long-awaited United Nations agency dedicated to empowering women regionally and globally. In an interview with Barbara Walters at the Saturday session, Bachelet said,

I look at this as a huge opportunity. As these countries [Egypt and Tunisia] form their constitutions and governments, there is great opportunity for women’s issues to be taken into consideration. … I will be meeting with them and doing my job in supporting [women’s] rights.

A major theme of the conference was that women’s rights are integral to any thriving democratic society. Bachelet said:

I believe in every country you have to listen to the women there. Women have their own priorities and they know best.

It’s heartening to hear some of the world’s most powerful women putting women’s rights at the top of the global agenda. Listening to them speak, it’s hard to doubt their honesty or their commitment. Yet despite their high profiles, they still may face difficulties mobilizing resources. The UN Women opening was delayed by underfunding. And the same day that the Newsweek profile of Clinton came out, The Washington Post broke the story that USAID had shifted priorities in major Afghanistan projects away from women’s rights. (Though an independent federal entity, the foreign-assistance agency “receives overall foreign policy guidance from the Secretary of State.”)

Bachelet acknowledged that the battle for global gender equity would be uphill, but seemed undeterred. She spoke passionately to Walters about the many advancements she hopes to make for women through her position at the UN. In battling the epidemic of rape in the Congo, for example, she said the UN is working on placing more women in peacekeeping forces in order to “give the sensation that women are powerful,” not just objects to be used in the evils of war.

“People are going to say ‘this woman thinks she’s a goddess,’” Bachelet joked. “But I’m not saying we will solve all the problems for women tomorrow. It’s a lot of hard work. It will take persistence and patience. But we have to be persistent or we will never improve women’s lives.”