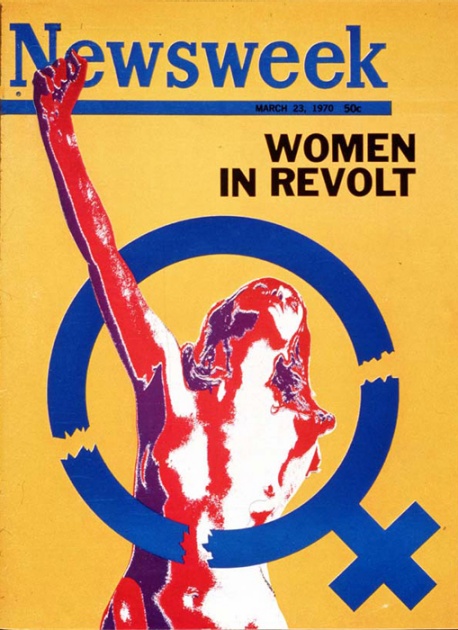 March 16, 1970: The publishers of Newsweek now have more confirmation than they might want that their current cover story, “Women in Revolt,” is both accurate and timely.

Forty-six women who work for Newsweek announced today that they have filed a complaint against the magazine with the Equal Employment Opportunity Commission charging sex bias–the first suit of its kind. Eleanor Holmes Norton, the employees’ attorney, read the complaint aloud at a press conference at ACLU’s New York office:

We allege that women at Newsweek are systematically discriminated against in both hiring and promotion and are forced to assume a subsidiary role simply because they are women. … We think it especially important that so highly visible and ostensibly open-minded an institution should not be permitted to continue a blatant policy of discrimination against women.

She noted that although the Newsweek cover story was written by a woman, they chose an outside freelance writer to do it, a virtually unprecedented action, as the magazine is normally written entirely by the staff. According to litigant Patricia Lynden, “There seems to be a gentleman’s agreement at Newsweek that women are researchers and men are writers, and the exceptions are few and far between.”

The job of a researcher–classified as an “editorial assistant” on the masthead–is to check the stories for factual accuracy. At the moment, 51 of 52 writers are male, and 35 of 36 researchers female. There are no women editors, and 64 of 76 reporters and news bureau correspondents are men.

Osborn Elliott, Newsweek’s editor-in-chief, denies that there is discrimination, but admits that most researchers are women because this is a “news magazine tradition” that goes back 50 years. Norton offered to drop the complaint if the magazine would immediately integrate women into the correspondence, writing and editing positions, and men into the research jobs. The employees have also sent a separate letter to Katharine Graham, whose Washington Post Company owns Newsweek, deploring what they call “the day-to-day atmosphere that discourages women as professional journalists,” but adding that they want to continue to make Newsweek a better magazine.

Epilogue: In an attempt to avoid more bad publicity, Newsweek management began meeting with Eleanor Holmes Norton and ten of the women who filed the complaint. On August 26, 1970–Women’s Equality Day–a “Memorandum of Understanding” was signed, and slow progress began. In the next five months, three women were included in summer training programs for reporters, one of whom was immediately hired, the other two told to wait for openings. One new woman writer was hired, Ann Scott, while another woman writer and a head researcher were promoted to Associate Editor positions. Six new researchers were hired, four female.

In 1975, Lynn Povich, one of the 46 women who filed suit, became the first female Senior Editor at Newsweek. In 1970, 25 percent of its editorial masthead was female, in 2010 it was 39 percent. But 43 of 49 of Newsweek cover stories published in 2009 were written by men, so the goal of equality sought in 1970 is still far from accomplished, and the struggle goes on.