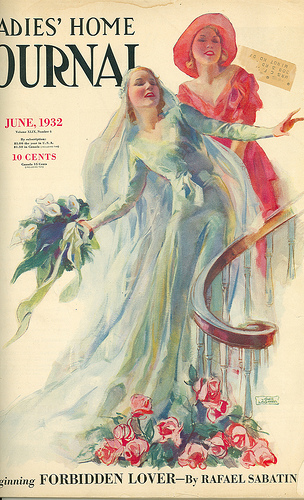 March 18, 1970: Just 48 hours after 46 women filed an E.E.O.C. complaint against Newsweek charging sexism, another and far more radical action has been taken against a mainstream media giant.

“Never underestimate the power of a woman” is the motto of the Ladies Home Journal, so when more than 100 women occupied its offices today demanding a more relevant and liberated publication, there was clear confirmation of that old saying. The siege began at 9:15 this morning with Media Women joining members of Redstockings, the West Village-One consciousness-raising group, New York Radical Feminists, Older Women’s Liberation, NOW and Barnard College students. Among the more well-known feminists present today: Susan Brownmiller, Ti-Grace Atkinson and  Shulamith Firestone.

The action was called to protest LHJ articles that are “irrelevant, unstimulating and demeaning to the women of America.” Bearing a banner that renamed the second-largest women’s magazine in the U.S. the Women’s Liberated Journal,” protesters quickly packed into editor John Mack Carter’s office to present their arguments and demands. The demonstrators made concrete suggestions and even came with a mock-up for a cover and 20 pages of ideas for specific articles. As Carter looked on, their statement was read:

It was a long, and trying day for all. But media coverage was good, and although there was a close call when Shulamith Firestone made a lunge at Carter, she was prevented from reaching her target by Karla Jay. Finally, after 11 hours of confrontation and debate, Carter has now agreed to some demands, and the occupation is ending. Among the things he has endorsed are day-care programs for the employees, editorial training programs for women and a special section on Women’s Liberation in the August issue.

FOLLOW-UP : An eight-page special section was published in August, 1970, written entirely by feminist women. They were paid $10,000 (equal to  approximately $57,934 in 2011) and the money was used to found the first women’s center in New York City.