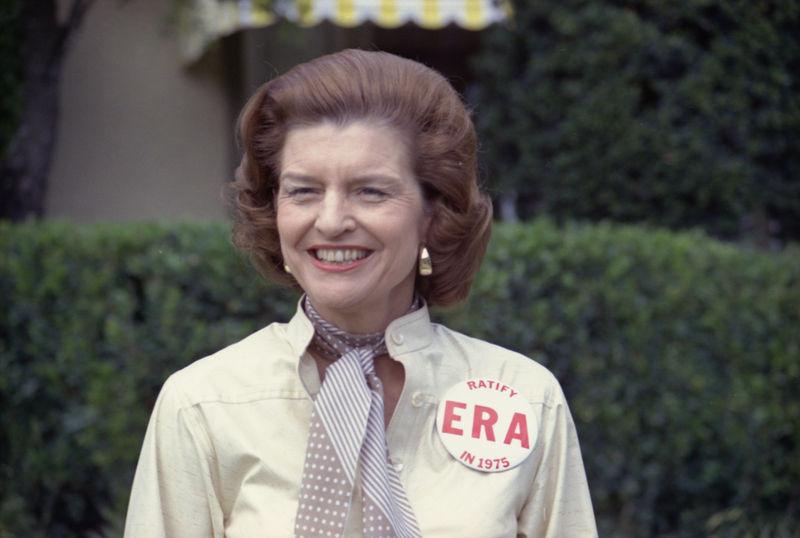 March 22, 1972: Equality for women and men, once considered among the most radical of ideas, has now received the overwhelming endorsement of both houses of Congress in the form of an Equal Rights Amendment to the Constitution.

Equality of rights under the law shall not be denied or abridged by the United States or by any state on account of sex.

By a vote of 354-23 in the House on Oct. 12, and an 84-8 Senate vote today, the measure now goes to the state legislatures, where 38 of the 50 must ratify by March 22, 1979 in order for the amendment to become law. Hawaii took the honor of being first, just 32 minutes after the Senate vote, and ratified unanimously.

As the March 22, 1979 deadline approached, two enterprising night-school law students, Catherine Timlin and Alice Bennett, discovered that Congress could choose to approve a ratification extension. NOW launched an ERA Extension Campaign, hosting coast-to-coast nightly phone banks and a 100,000-person march in Washington D.C. Congress soon changed the deadline to June 30, 1982 (a compromise between those who wanted 7 more years and those who wanted no extension).

But even this extra time proved insufficient to convert conservative Southern legislators, and those in Western states in which the patriarchal Mormon Church had great influence. The support by both major parties that E.R.A. had enjoyed since 1944 vanished at the 1980 G.O.P. convention as it became a partisan issue, with “Reagan Republicans” opposed. Though a mighty effort was made during the final year, the new deadline came and went without success.

But the quest for equality never expired. The need for a specific ban on gender bias was highlighted as recently as January, 2011, when Supreme Court Justice Antonin Scalia said in an interview that sex discrimination is not banned by the Constitution. Though some of his colleagues may disagree, Justice Scalia is technically correct: Without an ERA, all protections against gender bias–except the right to vote, protected by the 19th Amendment–are subject to revision, reinterpretation and revocation by simple legislative majorities or lower courts.

To put an explicit ban on sex discrimination in the Constitution, some favor a “start-over” strategy with Congressional hearings and a new vote on the E.R.A. Rep. Tammy Baldwin (D-WI) introduced a bill this year on International Women’s Day with another solution: Instead of extending the deadline, eliminate it entirely, then recognize the 35 ratifications already accomplished and let today’s feminists finish the process started in 1972 by winning those last three states.

Eliminating the deadline has strong precedents. None of the first 17 Constitutional amendments were given a time limit for ratification; the time limit for the E.R.A. was in its proposing clause, and has never been a part of the amendment’s actual text; and the most recent amendment to the Constitution, the 27th, took from 1789 until 1992 to be adopted–that’s 203 years.

So a new round of state ratifications for the E.R.A., 34 years later, is not an excessive or unprecedented pause. This is a much different and far more feminist country today than it was in 1972 or 1982, but one which still lacks a permanent, nationwide and Constitutional assurance of equal treatment for men and women. If we today have the same persistence and dedication toward our amendment as the suffragists did for theirs, then the result will be the same, and the date of the E.R.A.’s ratification will join August 26, 1920 as a landmark day in the nation’s long, slow march toward equality and justice for all.