Finally, A Disney Film in Which Mom Is Neither Dead nor Witch - Ms. Magazine
Skip to content 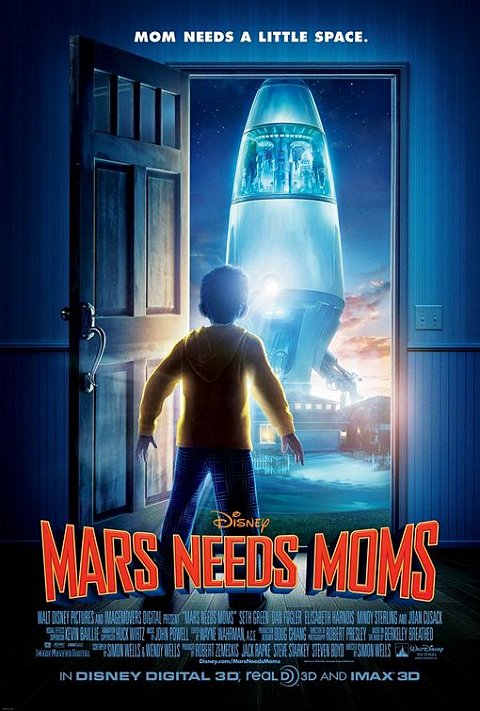 Given the official trailers’ focus on mothers as nags whose main purpose is to cook and vacuum, I was very pleasantly surprised by the new Disney film Mars Needs Moms. However, I seem to be in the minority–most view the film as an anti-feminist screed.

Going into the film well aware of Disney’s representation of mothers as either good and dead (see Cinderella, Snow White, Beauty and the Beast, The Little Mermaid), as evil-stepmothers (Cinderella, Snow White), or as non-maternal villains (The Little Mermaid, Sleeping Beauty, 101 Dalmatians, The Rescuers), I fully expected Mars Needs Moms to portray the tired mother as either dead angel or evil witch. To my pleasant surprise, it instead explored gender as socially constructed, parenting as problematically gendered and both sexes as equally good at heroics.

Though the trailers themselves play on sexist, anti-mom stereotypes (using copy about moms such as “we can’t live with them”), the film, a 3D sci-fi tale of the young Milo travelling to Mars to rescue his kidnapped mother, nods to what a difficult job parenting is (noting at one point that the Nanny-bots created to raise young Martians have to be retired after raising only one child even though Martians excel at robot creation).

The film opens with the standard depiction of moms as overbearing nags who limit the fun of (boy) children, but it quickly moves into a nuanced (and entertaining) portrayal of a planet without traditional mothers. Martians are supposedly no good at mothering, which Gribble (sidekick to the young male protagonist Milo) notes is ironic, seeing as Mars is a society run by women. Here, Gribble plays the role of gender essentialist, assuming only women can fulfill the mothering role. Yet what the film ultimately suggests is that either gender can mother and, even more radically, mothering should be re-vamped as “parenting.”

Though one post I read interprets the depiction of parenting as heteronormative, noting “Mars Needs Moms is an incredibly anti-gay film,” I disagree. The post argues,

The movie goes out of its way to show that before Butchy McLes-alien took over, all children were raised by a man and a woman. Just like the Martian bible says it should be! …” going on to claim that the film is “offensive to anyone who has a non-structuralist family … the overall message of the film is ‘Unless you’re raised by one Mom AND one Dad, then you’re wrong.’

However, what the post doesn’t note is that the movie makes a marked shift from it’s opening use of the term “mother” to closing emphasis on the non-gendered term “parent.” In fact, in one scene a slew of male parents holding young Martian hatchlings dominates the screen, indicating that what these hatchlings are missing is not mothers, per se, but parents rather than nannybots.

This same post rallies against the “inter-species romance between Gribble and Ki, since apparently that’s okay, as long as it’s not gay.” I would instead argue that this romance queers the heteronormative model.

Other reviews offer what I see as a misreading of feminism. For example, Alynda Wheat in her People review cites the “nasty gender politics of the film,” arguing that the evil Supervisor is “a vicious caricature of a feminist who thinks men are stupid and raising kids is a waste of a woman’s time. While I see what Wheat is getting at, her wording suggests feminists are man-hating, anti-mother villains and that the Supervisor is a particular nasty incarnation of these tenets.

In another review, Tom Long mocks women’s studies as a discipline, writing that the film’s portrayal of the “ideal mom” as “stay-at-home housewife”  is likely to instigate a “stampede of women’s studies doctoral candidates trying to file thesis proposals” about the movie. Again framing feminism as an anti-mothering movement that demonizes the housewife, Long also makes a faulty assumption that the mother of the film is a housewife. She may be, and we only see her at home doing “domestic duties,” but to presume she does not also have a job falls into the old dualist trap that suggests some women work outside the home, some inside it. The reality is that most women do both. This take also falsely promotes the tired notion that feminists are anti-housewife and anti-mother.

While Melissa Harris argues the message of the film is that “ambition turns women into soulless ugly overlords who give up motherhood & dispose of men,” I would counter that the film displays the “power-over” model as the problem–a paradigm that denies the importance of parenting (in the film and the world). Yes, “boy with gun sets the world right,” but Milo also goes through a gender-troubling transformation, learning to empathize, co-operate and appreciate caregiving and nurturance–quite a shift from the boy’s-boy at the outset who talked back and loved zombies.

Other critics were troubled by the film’s representations of race. Admittedly, the dreadlocked hair and tribal-type dancing does smack a bit of the Dances with Wolves/Avatar meme, but the film suggests it is these more communal, non-hierarchical and gender-troubling characters who offer a better societal model than that promoted by the militarized Supervisor. And here, the film again deconstructs norms of gender, revealing that what we presume to be hyper-masculinity is actually a hyper-militarism that can be acted out regardless of gender.

Mars Needs Moms is no uber-feminist utopian film, but it’s a step in the right direction for the notoriously anti-feminist Disney. And at least the mom is not dead.