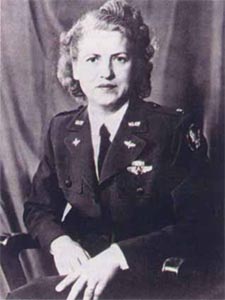 March 25, 1942: It was officially confirmed today that 25 of America’s best women pilots are going to Britain to help with the Allied war effort.

After learning that the American Army Air Corps and Ferry Command had no immediate plans to use women, Jacqueline Cochran began recruiting women pilots about six weeks ago for duty in the British Air Transport Auxiliary. According to Air Commodore H.R. Thornton, the women will ferry light aircraft from factories to the field and be about paid $4,000 per year [PDF].  They will first go to Canada for training, physical examinations, and flight tests.

Though Americans are quite supportive of the British war effort, today’s move is controversial because experienced pilots will be needed here to train new pilots for our own rapidly expanding war effort. But a number of qualified women pilots will remain in the U.S. in order to do such training if called upon.

In the U.S., women pilots can currently serve only in the Civil Air Patrol and as instructors. Cochran learned to fly in three weeks, earned her pilot’s license in 1932, and has been flying competitively since 1934. In 1938 she became the first woman to win the prestigious Bendix Transcontinental Air Race. On September 28, 1940, a year after the war began in Europe, she wrote to First Lady Eleanor Roosevelt suggesting the establishment of a women’s flying division of the Army Air Corps. Last June she proved that women could perform useful tasks in military aviation by becoming the first woman to fly a bomber across the Atlantic.

FOLLOW-UP: The women pilots who went to Britain in March didn’t stay there for long. On September 15, 1942 Cochran was back in the U.S. to establish the Women’s Flying Training Detachment under Army Air Corps chief General Hap Arnold. On August 5, 1943, her group merged with the Women’s Auxiliary Ferrying Squadron established by Nancy Harkness Love to become the Women Airforce Service Pilots–better knows as WASPs. Headed by Cochran, they would fly numerous ferrying and target-towing missions and suffer many casualties in the line of duty between then and their deactivation on December 20, 1944. In 1977 Congress voted to finally give these women the veteran status they deserved.

After the war, Cochran continued to fly, becoming the first woman to break the sound barrier, the first to reach twice the speed of sound and the first to land and take off from an aircraft carrier. No one, male or female, set more speed and distance records than she did during her lifetime. She was awarded the U.S. Distinguished Service Medal (1945) and the Air Force’s Distinguished Flying Cross (1969) and Legion of Merit (1970). In 1971 she became the second woman, and first living woman, inducted into the National Aviation Hall of Fame, and in 1996 was honored on a postage stamp as “Jacqueline Cochran, Pioneer Pilot.”