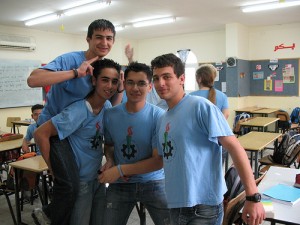 There is nothing in the world more infuriating and yet more life-affirming than attempting to teach a room full of 15- and 16-year-old boys why feminism matters. Yet, as an 11th grader in high school, this is what I’d set out to do.

My sophomore-year history teacher had given me the opportunity to teach two of his advanced-placement U.S. history courses on women’s history and feminism, an area that, through independent reading, research and writing, had earned me what my teacher called “expert status.” I was flattered and looked forward to a challenge. I got one.

“It’s just that I think women are different,” Andrew Myers says. “Why do we always need to talk about how women can be like men? I mean, they’re not men so why should we ignore the fact that they’re a certain way naturally?”

Andrew is a sophomore who compensates for his small build by walking with a swagger that even on John Wayne would be over the top. Yes, I tell him, women are different from men. Which, of course, must mean that they are “naturally” suited to the home and hearth. Oh, and while we’re on the subject of natural inclination, perhaps we can also agree that Native Americans are naturally inclined to be noble savages who are only able to realize their potential for civilization through the influence of white people. Oh, and black people are just naturally more physically powerful than white people, so why should we ignore their inherent potential for manual labor like cotton picking?

Andrew turns pink and juts out his chin while other members of the class giggle. All jokes aside, I tell them, Andrew makes a good point. Why do we talk about feminism? What’s the point? Why all the fuss? What, at the end of the day, were women such as Elizabeth Cady Stanton, Gloria Steinem and Susan Faludi hoping to achieve? These questions are my way of testing not only if they’ve read the course packet I’d put together but whether they’ve actually given any thought to what they’ve read.

Michael Zimmerman raises his hand and hesitantly says, “I don’t think that it [feminism] was about being like men, I think that it was about, you know, equality.” I ask him to point to a specific place in the reading that supports his argument. He comes up with a quote from the bottom of an article written by Kathleen Neal Cleaver entitled “Women, Power, and Revolution.” Though it is not the text I would have immediately picked, the quote he gives the class is a good one:

During that era, we hadn’t developed much language to talk about the elimination of gender discrimination. What we sought to eliminate were the legal, social, psychological, economic and political limitations still being imposed on our human rights, and on our rights as citizens.

I nod and ask the class to note the use of the word “language.” Gender, I tell the class, is a form of categorization and classification which, like any other means of labeling, depends on the taxonomist. If defining or pointing out instances of inequity can seem to be an ever-shifting mark, it is because the rhetoric is often designed to suit the needs of the rhetorician. The feminist movement is about women finally taking control of the words–changing the language which imprisons us and anyone else who has been relegated to “minority” status throughout history. This is what I tell my class, and I feel a little surge of pride when I see them lean over their notebooks and scribble furiously. Out of the corner of my eye I catch Andrew give me a look, not of contempt or annoyance but, dare I say, of respect.

Photo of high school boys in Israel from Flickr user hoyasmeg, under license from Creative Commons 2.0

Erin Bilir is a journalist and high school student with a passion for women's issues. Erin has been a commentator and reporter for Youth Radio International since 2008 and her work has been featured on National Public Radio, the Huffington Post, the New York Times UpFront Magazine, newshour.com, and Ms. Magazine. Erin is also the founder and host of Girl Talk, an online web broadcast devoted to the discussion of issues which impact the lives of girls.