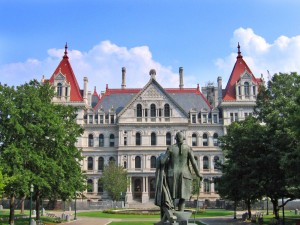 March 30, 1970: The New York State Assembly today came within three votes of replacing the state’s 140-year-old ban on abortions–except those to save the life of the woman–with a bill that would make abortions a matter strictly between a woman and her doctor (through the 24th week of pregnancy).

After the State Senate passed the bill 31-26 last week, it looked as if it might get the required majority of 76 votes in the 150-member Assembly as well. Republican Assembly Speaker Perry B. Duryea had even announced that if 75 votes were cast in favor he would cast the tie-breaking vote in support of the measure. But today, after an emotional eight-hour debate and roll-call vote, he declared that “absentee votes” (those cast by members who left the chamber before the roll call) would not be counted. This ruling was a departure from his common custom of allowing legislators to record their votes with the clerk and then leave the floor, providing they had listened to the full debate.

The ruling dropped the number of votes in favor of the bill from 75 to 73 and caused it to fail. After the vote, Republican Assembly Member Constance Cook, one of only four women in the Assembly and a co-author of the bill, said she will try to get the measure reconsidered next week. During the debate, Cook spoke to the notion of “abortion on demand”:

I submit to you, we are not considering here today abortion on demand–we have that already. The only question is how abortions are to be had. Right now if you have $25 you get an abortion in the back alley under the most abominable conditions, but if you have $2,500 then you can go elsewhere and get a proper abortion. I hope we, in our debate, never lose sight of that fact. We now have abortion on demand … and what we are here to do is put the illegal abortionist out of business.

FOLLOW-UP: The bill was voted on again by the Assembly on April 9, 1970, gaining the necessary 76 votes despite intense pressure put on legislators by the Roman Catholic Church. It was a dramatic moment when, just as the bill’s defeat was about to be announced, Democratic Assembly Member George M. Michaels bravely arose and, with tears in his eyes, said:

I realize, Mr. Speaker, that I am terminating my political career, but I cannot in good conscience sit here and allow my vote to be the one that defeats this bill–I ask that my vote be changed from ‘no’ to ‘yes.’

The bill then went back to the State Senate for re-passage and was signed into law by Republican Gov. Nelson Rockefeller on April 11, 1970. Said Rockefeller,

Women’s Liberation played an important part in the passage of this bill.

The abortion-rights victory in New York was a landmark, not only because the law was so unrestrictive–and in a very large state–but because it imposed no residency requirements. That meant women from states with extremely restrictive laws could have access to legal abortions in New York, if they could afford to get there. The same year, Alaska and Hawaii’s legislatures also voted to not just liberalize their abortion laws but repeal them (as had been done by ten other states in 1967-1969). Washington State’s abortion law would also be repealed in 1970, by a voter referendum. By 1972, 64 percent of Americans told a Gallup poll that “the decision to have an abortion should be made solely by a woman and her physician.”

On January 22, 1973 the U.S. Supreme Court issued its ruling in Roe v. Wade, affirming that the right to privacy “is broad enough to encompass a woman’s decision whether or not to terminate her pregnancy.”