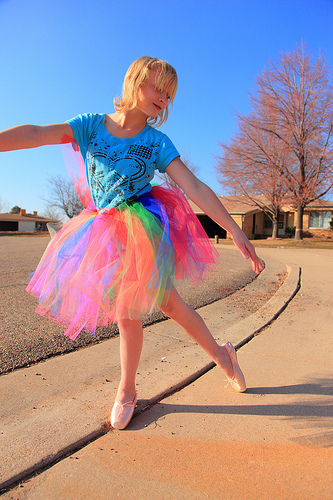 I was maybe 8 or 9, my chubby self stuffed into a brand new pink leotard and tights. I was not happy in this outfit, largely because my little body did not “fit” the ballet-body type–a fact my older brother’s very tall, very thin girlfriend pointed out regularly.

When I got out of the car, rather than going to my room to change, I headed to my backyard easel and began to smear bright orange paint across a blank canvas. Problem was, I was not very neat–another thing I had been hearing girls should be. Just as I remembered my mom warning me to change out of my new dance clothes before I got them dirty, I dropped a large glop of orange paint across my middle, highlighting that part of my body that I knew barred me from ever performing in the Nutcracker like my brother’s  girlfriend.

Panicked, I headed to the laundry room, whose window-paned door I had inadvertently cracked a few days before in a rush to move my book-laden backpack. It was the bottom window pane, a teeny-tiny crack. I didn’t think anyone would notice, and they hadn’t. So maybe I could pull a similar ruse with my orange-stained leotard.

I snuck to my room, changed, and surreptitiously crept back to the laundry room to hide my balled-up leotard at the bottom of the laundry basket. My dad stormed in, angered. I assumed he had caught  my act of deception. He headed toward s the kitchen, shouting at my mother, “Ms, have you seen this?” (I realized years later that my father called my mom “Ms” not to honor the feminist concept that a woman should not be defined by her marital status, but in mockery of the idea of feminism.)

“That damn worker has broken the window! That’ll teach me to hire those Mexicans!”

Standing in the laundry room, I was reminded of my birthday party the year before–the one where my mother complained in my dad’s ear that “all her little friends are Mexican.” Shortly thereafter, I was moved to private school.

I didn’t have a word for these prejudiced comments I often heard my parents and others say against Mexicans. I was not quite sure why they were good enough to serve as ranch-hands and cleaners, but not good enough to be my friends. I suddenly felt I had to come clean about the window–that I could not let one of the Mexican ranch-hands take the blame.

At the time, I did not know that this was my birth as a feminist. But, looking back, it was a first important “click” among many–the one where I realized that the way my father treated the migrant workers that made his ranching wealth possible was unfair. That the way I was treated because I was not thin or blonde was not fair. That me being one of those chubby kids hurt me in a way similar to how hearing things like “those Mexicans” might hurt people that didn’t have white skin like mine.

It was an early lesson in intersectionality, one that I remember as vividly as that bright orange paint staining my protruding, ballet-pink belly. When I am hard on myself for being the sneaky kid who didn’t immediately ‘fess up to breaking the window or ruining her leotard, I try to send love back to my young self, realizing that I was being taught to hide so as to better fit into the “good girl” mold. Thanks to feminism, I no longer have to hide.