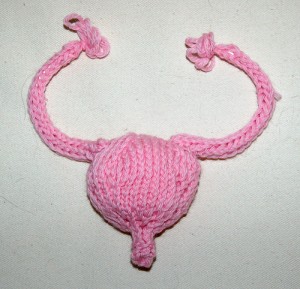 Isn’t it interesting how Republican politicians are so eager to get regulators out of corporate boardrooms and into women’s bedrooms?

Florida Democratic State Rep. Scott Randolph made that connection on the floor of the Florida House recently:

He was referring to the glut of anti-choice bills under consideration in Florida–but some of his colleagues objected to his use of the word “uterus.” Seriously.

He was reprimanded by the Republican leadership for using that shocking word because they were concerned about offending young pages who might be present. It’s been reported that Randolph was told that he could not mention body parts on the floor. I guess that he’ll never be able to participate in discussions of fingers, toes, ears, noses or throats. Can he ever ask for a show of hands? Does this just apply to him or every Florida House member? Can you say “member?” So many more questions.

And so the fun began.

In the crazy politics of Florida, if women incorporate their uteruses that may be the only way to keep government’s hand off it.

Unfortunately, Florida doesn’t have a lock on crazy politics and politicians. They’re in every corner of the country, and we should adopt this campaign in every state. Conservative Republicans politicians don’t respect women but they do respect–no, revere–corporations.

Women: It’s time for us to become corporate honchos, chairs of the board, chief executive officers, captains of industry, corporate titans, big muckymucks. Think of the benefits:

My Uterus, Inc. (hereafter referred to as MUI) should be a privately held corporation, incorporated in Delaware, Nevada or the Cayman Islands, whichever is the least interested in regulations and taxes.

MUI could shield assets from the U.S. government by outsourcing and setting up offshore accounts.

Instead of having a birthday party, MUI would hold annual meetings in exotic places and write them off as business expenses. MUI will take fact-finding trips, not vacations.

MUI would be a wholly-owned subsidiary of My Body, Inc. and, as such, would be eligible for annual bonuses based on performance.

MUI will be exempted from all health and safety regulations, because they’re just too intrusive.

MUI will raise unlimited amounts of money for political candidates it deems most closely aligned with its values.

Incorporate your uterus today and encourage every woman you know to do the same. Let’s drive the regulators out of our boardrooms.

Photo by Flickr user ilovebutter under license from Creative Commons 2.0