The Hottest Dishes of the Tartar Cuisine (No, Not a Cookbook) - Ms. Magazine
Skip to content 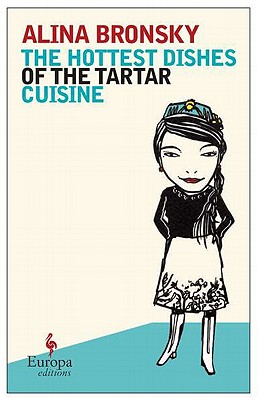 Rosa Achmetowna, the unapologetically manipulative, judgmental and unruly Tartar matriarch in Alina Bronsky’s The Hottest Dishes of the Tartar Cuisine, makes “tiger mother” Amy Chua look like a pushover. The novel begins with a hot mustard bath and a bloody knitting needle as Rosa tries her best to end her “stupid,” 17-year-old daughter Sulfia’s pregnancy. Sulfia miscarries one child and Rosa is satisfied with her labors until she notices Sulfa’s stomach begin to round. “Must have been twins,” says Klavida, the woman who was paid to abort only one baby. “So what?”

The sublimely defiant Aminat is born nine months later on a cold December night at Birthing Center Number 134, and Rosa falls in love with the dark-eyed child who shares her Tartar features:

My granddaughter Aminat was lucky. She hadn’t inherited any of the sluggishness or ugliness of her mother. She had my gently wavy black hair, a slender nose and a bright look on her face.

Rosa decides that she is best suited to raise Aminat, so she kidnaps the child and procures forged documents certifying that Sulfia is mentally ill and should not be allowed near her daughter. Mother and grandmother wrestle the child back and forth until Rosa finds a way to nudge herself back in the center of her daughter and granddaugher’s life. Rosa asks herself,

Was I an evil grandmother? I didn’t look anything like a grandmother. I looked good. I was pretty and young looking. You could see that I had vitality and was intelligent.

The world according to Rosa, the reader quickly finds out, is not quite what is seems. Rosa just wants what’s best for her family and she’ll do whatever she can to secure a better life for herself and Aminat–even if that means negotiating a marriage between Sulfia and Dieter, a dull, snub-nosed German writer who’s more interested in Aminat than in Sulfia, but who can provide the women with passage out of the crumbling USSR.

Reading The Hottest Dishes, I get the sense that good storytelling for Bronsky is natural, easy. She uses humor to paint a dark and tangled Soviet family saga–one that unravels piecemeal through Rosa, the unreliable narrator who speaks in a series of self-delusions and half-truths that hint at a more complex and tragic reality. What makes The Hottest Dishes great is Bronsky’s sharp writing and desperate humor. I missed Aminat, Sulfia and Rosa–yes, even Rosa–when the book was over.

Bronsky, a Russian immigrant who moved with her family to Germany at the age of 13, was an unknown author before the 2008 publication of Broken Glass Park, her debut novel. The Hottest Dishes is her second, and hopefully far from her last. I plan to go back and read Broken Glass Park, and then whatever comes next from this important new literary voice.