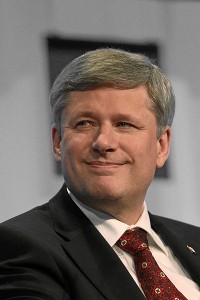 Five weeks ago, the Canadian government was forced into an election, one the ruling party–Stephen Harper’s Conservatives–claimed the Canadian public didn’t want. But the campaign has turned into one that is likely to change the political landscape of Canada forever, sparked in part by an unprecedented debate over reproductive rights.

In Canada, it’s possible for the ruling party to fall from power without an election if it holds less than 50 percent of federal seats. In that case, opposition parties (of which there are currently three) can band together and vote the ruling party down. It has only happened six times in the country’s history, Canadians being a fairly polite bunch. However, the Conservatives were voted down after Prime Minister Stephen Harper refused to disclose the cost of two things: controversial crime legislation and new jet fighters for the Canadian Air Force. And now, on May 2, Canadians will head to the polls.

For the first time since a general election was held in 1984–when Party leaders engaged in a nationally televised debate on women’s issues, including everything from daycare to world peace– women’s rights have taken center stage in Canada’s mainstream media and in public discourse. The conversation has focused on abortion rights–or, more specifically, the effort to erode them–and on the $9 million that International Planned Parenthood has not received from Canada. Anyone else hear an echo from south of the border?

I remember that televised debate 27 years ago. It was really cool to see men vying for the top job in Canada by proving how feminist they were. But since then, national women’s organizations have lost federal funding and disintegrated, most in the past five years while Harper has been in power.

So this election has re-ignited the “women’s debate,” despite Harper’s pursed-lip insistence that he “won’t open the abortion debate.” The issue exploded after Saskatoon’s Conservative member of Parliament Brad Trost bragged at a recent pro-life convention that the federal government has defunded the International Planned Parenthood Federation. That’s something not even U.S. Republicans have achieved.

But Harper’s spokespeople deny the claim that IPPF has been defunded, though 2010 marked the first time in 40 years that the organization did not receive funding from Canada. That certainly sounds like defunding, but the Harper government claims that the organization can receive money so long as it plays by Conservative rules. That means it has to apply for funds under the new G8 maternal-health policies to receive its $18 million three-year grant. But the catch is that Canada has decided to exclude all funding for abortions in its global maternal-health policy.

IPPF has reported that they saw the politicization of abortion rights arising quite clearly in Canada, and reworked their 2010 application to mirror the one they presented in the U.S., stipulating that abortions not be paid for with Canadian dollars. Their application was apparently awaiting approval when the Harper government fell, leaving the issue unresolved.

This is only one of a number of dramatic election issues feeding the flow of women voters toward Canada’s left-wing New Democratic Party (NDP). Absent a Canadian Tina Fey (though kudos to our beloved Rick Mercer, who incited an explosion of ‘voting mobs’ on campuses across the country), we Canadians have turned to the internet for our political humor. One top YouTube contender for capturing women’s votes is a series of videos in which Canadian women break up with Prime Minister Harper, delivering lines like “Stephen, things between us just haven’t been working…” and “I just feel like you don’t listen to me anymore…’

This kind of web-based humor is contributing to the dramatic rise of the NDP in polls. It’s thrilling to watch, but the NDP’s sudden popularity is also feeding speculation that vote polarization may pave the way for Harper to win absolute power in Canada for five more years by capturing more than 50 percent of the seats in Parliament. Traditionally, the race for federal leadership comes down to the Liberals and Conservatives, with other parties, including the NDP, receiving a smaller share of votes. But if progressives split their votes, right-wingers, left with only the Conservative party as an option, may be able to take Canada by storm. If Harper wins, he can control funding of abortion services overseas and women’s reproductive services here at home.

The break-up with Stephen Harper may be a long and messy one. We may have to share a home for five more years with a man who would take away our rights. But that doesn’t mean that we will stop agitating for those rights to be upheld.