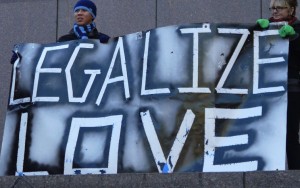 A “Yes on Prop 8” sticker on a neighbor’s house led Jaime Jenett, a non-biological lesbian mother who lives in the San Francisco Bay Area of California, to write this letter:

You don’t know me but I walk past your house three to four days a week on my break from work. Every time, I’m struck by your ‘Yes on Prop 8’ sticker. I’m guessing this may not be your intention, but every time I see your sticker, it feels like someone is standing in my face, yelling, ‘I hate you and I hate your family.’ I wanted to let you know what kind of an impact it has.

I thought the most constructive thing to do would be to take this opportunity to introduce myself. I’m guessing (maybe incorrectly) that you don’t know any Lesbian, Gay, Bisexual or Transgender (LGBT) people and in particular LGBT parents. I have found that actually meeting or knowing about a real live person who is happy, healthy and well-adjusted AND gay can sometimes change things for people who seem to feel the way your family does about people like me.

I can tell from your house that you have children. I am also a parent and the issue of Proposition 8 has taken on a whole new meaning for me since having my son, Simon.

I have known I was a lesbian since I was 17. When I came out to my family, they were distressed because they were very concerned for my safety. They knew that people who have been taught to be homophobic do and say terrible things to people like me. However, my entire family,  including my parents and grandparents, were also very clear that they loved me unconditionally and would support me in leading the happiest, healthiest, most fulfilling life I could live, even if I were gay. That meant more to me than probably anything in my life.

I met my wife, Laura, over eight years ago through a mutual friend. We were good friends for some time before we fell in love. A year and a half later, when Laura asked me to marry her on the Pont Neuf bridge in Paris with an antique diamond ring, I gleefully said yes. Our family and friends were thrilled and we had a large, beautiful wedding in Tilden Park, at the Brazil[ian Room], with over 120 family and friends.

Laura has known her whole life that she wanted to be a parent. I was a little more reserved about the idea, but after overcoming my fears that I would not be the kind of present, attentive parent I wanted to be, we moved forward with our process. A year and a half after we were married, Laura gave birth to our son, Simon.

Simon became gravely ill with a serious heart condition when he was almost four months old. He was in the ICU at Children’s Hospital Oakland for four months and nearly died numerous times. One of the things that sustained us as parents through that time was love. Love for each other, love for Simon and the love that so many other people showed us. Our doctors and nurses, friends of friends and relatives of friends prayed for us, sent us emails, gave us hugs, brought Simon toys and supported us as a family.

We were later shocked to learn that many of the people who were so kind to us in the hospital were evangelical Christians. They were able to treat us with kindness, love and compassion AND be Christian. They supported us as a family even though they may have had issues with us being gay, because they knew it was the truly good and kind thing to do. They did what Jesus would have done.

Which brings me to Proposition 8.

The only thing Proposition 8 and policies like it does is hurt families. It doesn’t do anything to strengthen your family or those of any other straight people. It just hurts families like mine, especially families with children.

My being gay and being in a happy, healthy relationship doesn’t actually hurt other people. It won’t make your kids gay and it won’t make my kid gay. Anyone who has spent any amount of quality time with gay people knows this. Prop 8 isn’t going to make it any less likely that someone is gay or that gay people will create families together.

Instead, it just makes us sad and feel scared that someday someone may hurt us or our families. And it makes the people that love us feel the same way. Fear and hurt are the opposite things that I would I hope loving Christian people like the ones that you seem to be, to bring to the world.

I am lucky enough to live in a state that has some policies that help me provide for and protect my family. I am the sole breadwinner right now because Simon is too medically fragile to be in daycare so Laura stays home with him. In other states with policies that seek to deny LGBT people the basic privileges straight people have, I might have been denied the right to visit my own son in the hospital while he appeared to be dying or he might be denied health insurance through me. That is simply cruel.

Denying Gay, Lesbian, Bisexual and Transgender people the same privileges heterosexual people have doesn’t actually help anyone. It just creates a culture in which people are fired, injured, killed and isolated for being gay. I know the goal of these types of policies is to somehow strengthen society but what they really do is divide us and hurt us. All of us. It hurts my parents when someone treats me badly for being gay and it will hurt my son when someone is cruel to his parents for being who they were born to be. It hurts me and I venture to say that in some ways, it also hurts you.

In the spirit of love, I want to reach out and invite you to learn about my family. We have a blog that we started at simonlev.blogspot.com that tells our story about living as a family with a critically ill child. You will probably laugh, you will probably cry and you may find that you come to see us as three of God’s perfect creatures.

Excerpt from RHRealityCheck.org. This commentary is part of a Mama’s Day series by Strong Families, published in partnership with RH Reality Check in our Mother’s Day 2011 series. Follow Strong Families on Facebook and Twitter.