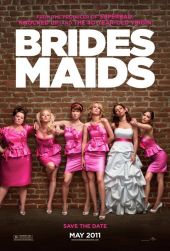 Turns out, to my enduring surprise, the answer to my headline query is “yes.”

I went to see the Judd Apatow-produced Bridesmaids with the thinnest of hope. A gung-ho comedy centered on a group of women? I’m in! But previews made it unclear whether the film would be the lady Hangover or a tepid rom-com (Blech!). And even though I have enjoyed several Apatow films, they have been very guilty pleasures, full of one-dimensional female characters and low-grade sexism. I am ambivalent about Kristin Wiig. I liked her as the single-mom roller-derby queen in Whip It. I loathe her on Saturday Night Live, where the charm she displays in film rarely comes through. And then there is that “bridesmaids” theme. The poor, loser lady without the ring thing has been done and done and done to the point of offensiveness. I wasn’t game for another why all women want to get married film. So, you see, there were a lot of ways Bridesmaids could have gone wrong in my eyes.

It’s funny! The script by Wiig and Annie Mumolo manages to be both smart and all kinds of hilarious. I mean all kinds–from Wendi McClendon-Covey’s ribald rifts on being a wife and mother to Maya Rudolph taking a shit in the street to Wiig hamming to get out of a traffic ticket or doing an impression of an erect penis. The stellar cast proves that gross-out and sexual comedy from a woman’s point of view can still make you cringe and laugh. It’s also smart–public pooping aside–and deeper than the previews let on.

It’s about women. (It even passes the Bechdel Test: Women characters talk to each other about something other than men.) Women women. Like women over 30 and 40, who rarely have movies centered around them. And it’s about women’s relationships with each other–the things we joke about, the silly things we do together, the ways we sometimes hurt each other. When Wiig’s character gifts her best friend with a Wilson Philips CD, or laughs with her over lunch about oral sex, it feels real. Wiig and Mumolo infuse the film with a woman’s voice, while still making it accessible to a larger audience. My husband enjoyed Bridesmaids, as did the group of teen boys who sat behind us (if their guffaws are any indication).

Bridesmaids is not about weddings. This is emphatically NOT a Kate Hudson-type move. Despite the wedding that is the film’s backdrop, Bridesmaids side steps the whole “Waaaa…my best friend is getting married and I’m not” silliness. The movie is actually about what happens to friendship when one life is going right while another goes wrong. It’s mostly about a woman who needs to get her act together–and not just in the love department. There is rom, but it doesn’t overshadow the com. Yes, Annie (Wiig) gets a guy in the end, but that wasn’t the point of the film and I appreciated that.

Chicago. Milwaukee. As someone born and raised in the Upper Midwest, in the Chicagoland area, I always thrill at seeing my stomping grounds on the big screen. I’ve trekked from Chicago to Milwaukee many times. (The ever-present state troopers along I-90 are a real thing.) The only thing that would have put a definite stamp of authenticity on the movie would have been a stop at the Mars Cheese Castle.

Great soundtrack. What can you say about a soundtrack that features a Nouvelle Vague rendition of “Blister in the Sun” and Wanda Jackson’s “Shakin All Over,” but “Download it. Now!”?

All this gushing is not to say that the film doesn’t have a few problems.

For such a smart movie, it was disappointing that Bridesmaids still went for the fat-chick-as-butt-of-the-joke trope. Melissa McCarthy’s Megan is predictably unfashionable, crude, unfeminine and sexually aggressive. It is clear that we are supposed to laugh at her, in part, because fatness is hilarious! She incorporates food in her sex play! Hee! What’s with all the self-esteem? Everybody knows fat chicks don’t have self-esteem. Funny! That said. McCarthy is comic gem, who infused the character with heart and depth.

Not surprisingly, the film was also largely whitewashed, despite having a biracial woman as one of the main characters. I found it odd that Rudolph’s character, who has a black father (Franklin Ajaye!), did not have any close black female friends or family. In this way, Bridesmaids stands as another example of how people of color can only exist in a narrative if they are deracinated and don’t disturb the whiteness.

If the box office and critical reviews are any indication, Bridesmaids is a hit. And given Hollywood’s penchant for following the money, maybe this means this will be just the first of many smart comedies starring women. And maybe we can put the ridiculous “women aren’t funny” foolishness to bed, too.