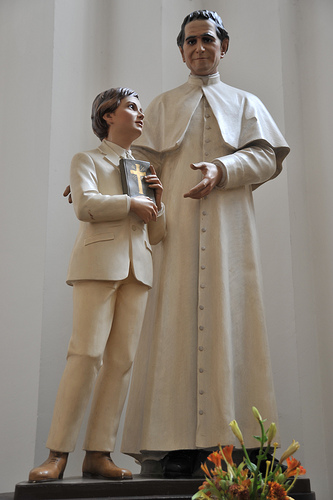 The Catholic Church has been accused in the past of dragging their feet on predatory priests. Now, they’re taking steps to show us they’re serious. The U.S. Catholic Church has plunked down $2 million to do the largest study to date on child sexual abuse by clergy.

Their primary finding, released yesterday, was that the Church’s sexual abuse problems were the result of the changing culture in the U.S. during the 1960s and 70s:

To be fair, the report admits some institutional factors, saying that some dioceses were “laggards” in recognizing sexual abuse and responding to victims. But it is quick to add that the media disproportionately focused on these cases.

It appears that the authors of the report believe the real problem was that hippies and uppity women unsettled the poor priests who weren’t adequately prepared to deal with the winds of change blowing through society. These traumatized priests clearly acted in inappropriate ways but this is what you’d expect when the social mores come undone in a permissive society. God knows they tried to do their best but they were only human.

I was an uppity hippie woman. I knew lots of other hippies, feminists and civil rights activists who would feel terribly guilty for contributing to child sexual abuse–except they don’t because this is absolute, utter nonsense.

The Church expects us to believe this new origin myth. As if child sexual abuse had never occurred in the Church anywhere before. Somehow, it emerged as a result of the counterculture tumult of the 1960’s and 70’s in the United States. That’s pure fantasy and revisionism, or a doctrine of faith, much like the Church’s anti-scientific teaching that the sun revolved around the earth.

Which brings up Galileo, who was imprisoned and excommunicated for suggesting that it didn’t. But before that, when he wasn’t looking through his telescope, he was a supporter of Joseph Calasanz, the patron saint of Catholic schools,  who founded the Piarist Order, whose mission was to educate poor children. Karen Liebreich, author of Fallen Order, reveals how this precursor to the parochial school system collapsed in 1646 due to the sexual abuse of students. She shows how Calasanz covered up the abuse in an attempt to protect the order and the church. It reads like it could have been ripped from today’s headlines.

We know this has been going on for centuries, not decades, not years–centuries. It’s time the Church owned its past and atoned for its sins. Until it honestly faces its history, how can anyone involved in the Church be trusted?

The Vatican too has just taken a public step to show they’re serious about catching abuse. They’ve sent a sternly worded letter to all bishops’ conferences worldwide establishing a deadline. Each diocese is to submit tough guidelines for dealing with child sexual abuse to the Vatican for review within a year. The Church has laid down the law.

There’s just one catch: They were in such a hurry to issue their decree that they forgot to insert (so to speak) any penalties for non-compliance and no mechanism for enforcement.

The letter, from the Congregation for the Doctrine of the Faith, is reported to clearly say that diocese must issue culture-appropriate guidelines on dealing with child sex abuse. (My request for a copy of the letter was unanswered by the U.S. Conference of Catholic Bishops.) It takes a long time to write guidelines like maybe:

Wow! That didn’t take all that long. So what are they going to do for the rest of the year?

It’s been reported that the letter clearly states, the sexual abuse of minors is a crime. For those bishops who were in doubt, the issue’s been cleared up. And they are being urged to obey local laws by reporting cases to local law enforcement. Again, wow! Is it just me or does it seem odd that any organization has to make a big point out of telling its employees to obey the law? It seems to be a tacit admission that they’ve acted as if they were above the law.

Then, before we get too carried away, and think they’re now going to be law-abiding citizens, they remind the recipients that bishops have ultimate authority. They may decide not to report a crime and to keep it secret, and maybe just look the other way.

This directive from the Roman Catholic Church leads me to wonder: What’s new?

For years, bishops all over the world have been more concerned about protecting the Church and the priests than protecting the victims. They’ve transferred predatory priests, giving them access to new victims; denied any and all accusations against the perpetrators; refused to cooperate with law enforcement agencies, often refusing to turn over documents tracking the transfers of the accused; intimidated victims when they reported the abuse; discouraged them from going to the police; and ended up paying out millions of dollars when all else failed.

But, now they want us to have faith that they’re serious?

A toothless letter that poses as a mandate and a report that shifts the blame to social forces beyond their control is just a continuation of a climate of denial.