Throwing Around the Word "Rape" - Ms. Magazine
Skip to content 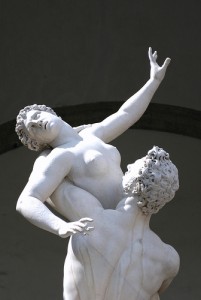 It looked so wrong in the little instant messaging box: “I’m gonna get raped tomorrow.”

For a moment, I was terrified that my friend faced serious sexual violence. But no, she was just concerned about her performance on an upcoming Advanced Placement test. I hear this word all too often in the hallways of my high school. It is used to talk about grades and tests (as my friend did) or to get psyched up about beating other sports teams (“We’re gonna rape them tomorrow.”). And every time I hear it, it sounds odd and startles me for a second. Why “rape?” Why is the word for such a vile act being tossed around high school like it’s a joke?

To use “rape” so carelessly trivializes its actual meaning. A senior on my school’s varsity soccer team points out that his teammates’ use of the word “was almost always accompanied by laughter.” A high school student who thinks rape is something to joke about does not realize the devastation of the act, and the genuine vulnerability women face. According to the Rape, Incest, and Abuse National Network (RAINN), one in six American women will be the victim of rape or attempted rape in their lifetimes and, according to 2010 Department of Justice  statistics, one in five college students will be sexually assaulted.

Though some might dismiss this high-school usage as simply hyperbole, University of Chicago graduate student Elise Kramer believes,

Using ‘rape’ in this way is sort of doubly meaningful. It bolsters the masculinity/powerfulness/coolness of the speaker in two ways; first, because threatening rape is inherently masculinizing and second, because being ostentatiously not sensitive to the word ‘rape’ is also masculine.

Some academics label our society a rape culture because it tolerates and seemingly approves of sexual violence against women as the norm. To prevent people from becoming more and more indifferent to the word–and thus indifferent to the prevalence of rape–we should work to raise awareness about the offensiveness of the word. University of California, Santa Barbara linguistics professor Mary Bucholtz reports that for several of her students, “once they became aware that the term is highly offensive, they stopped using it.”

It is true that words used as slang can lose some of their original meaning. We have become accustomed to hearing “My parents are gonna kill me” and “I’m dying here.” But I can’t get used to casually hearing about anyone being raped. I never want to feel comfortable with that usage of the word.

Photo of the sculpture “Rape of the Sabine Women” by Giambologna in Florence, Italy, from Flickr user storem under license from Creative Commons 2.0