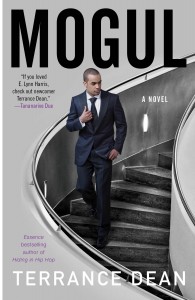 Terrance Dean’s debut novel Mogul (Atria Books) tells the story of entertainment music producer Aaron “Big A.T.” Tremble’s struggle to come to terms with his sexuality. After compromising photos of Big A.T. and another man are sent to his girlfriend, Big A.T. must decide whether to publicly reveal his sexuality and risk compromising his success.

In his first interview about Mogul, Dean tells Ms. readers how homophobia impacts relationships between men and women.

Why tell the story from multiple points of view?

Terrance Dean: I wanted readers to see each individual character and the interpretation of their experience. Big A.T. is the main character, then Craig who is a blogger/journalist and then there’s Jasmine, the girlfriend of Big A.T. who’s telling her perspective. I think when women see her experience they’ll realize her naïveté and how blind women can be when they give their hearts and minds to someone. I especially thought it would be powerful to see the main character’s journey and struggle. A lot of times people don’t understand. They say, “Why don’t a lot of down-low men or gay men just come and out and be who they are?” without realizing some of the internal issues as well as the outside forces that prevent them from coming out.

What are the forces that would prevent a down-low man or a gay man from coming out?

In Mogul, Big A.T. is part of the hip hop and entertainment industry that personifies machismo, the testosterone, the gangsta hardcore images we see consistently played out in the videos and the music. When we perpetually see and hear that on a day-to-day basis, people feel they have to buy into it. Big A.T. has to buy into it to maintain his own credibility, but also for fear of being ostracized within the community that he became a huge success in. Not wanting to be a disappointment to our family, friends and church communities—all of those things play a huge factor in preventing down-low and gay men from being who they are.

In the book, you don’t really distinguish between being gay and being on the down low. Is there a difference?

A down-low man engages in a relationship with a woman but unbeknownst to her has same-sex relationships with other men. He keeps his sexuality as well as his sexual relationships with other men a secret. He’s also deceiving his whole community—his family, his friends and all those people near and dear to him. Someone who is openly gay has no problem self-identifying who they are. They don’t deceive and manipulate women. They know who they are, and they are comfortable in their skin and prefer to be in relationships with men. In the book I don’t show that distinction, because I want the readers to come to their own conclusions and see [through the characters’ experiences] what the challenges are and why they choose to live the lifestyles they lead. Big A.T., he does identify; he knows his sexuality, but those around him won’t allow him to be who he is.

The down-low brother is portrayed as a predator in media a lot of the time. How do you address this stereotype in the book?

Why should women read about men having sex?

We all should be very mindful of who is having sex and what type of sex that they’re engaging in so we know how to protect ourselves. I really wanted to show in the book how you have to protect yourself regardless of who you’re in a relationship with. You still have to be consciously responsible when you’re having sex and engaging in sexual relationships regardless of it’s man on man, woman on woman or a man with a woman. I think women should be very open, as well as men, but women more so about learning the sexual behaviors that same-sex relationship men have.

How should women negotiate the world of the down low without perpetuating more mistrust between men and women?

In any relationship, people have to ask questions and protect themselves. In this era of down-low men, women have a right to ask whether or not their men have engaged in a same-sex relationship. Ask a man if he’s ever had a sexual encounter with a man and what was that sexual encounter. Ask those questions to protect yourself. Don’t be afraid of the answer and be willing to walk away if the answer doesn’t suit you.