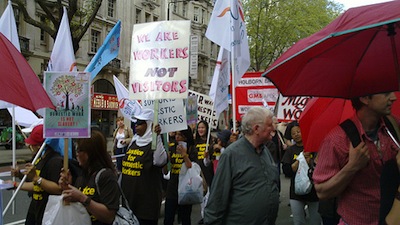 Dominique Strauss-Kahn’s alleged assault of a room attendant at Manhattan’s upscale Sofitel Hotel has dominated recent headlines. But what about everyday cases of hotel harassment that often go unreported or uninvestigated? In light of the recent scandal, New York lawmakers and hotel owners are finally realizing the vulnerability of hotel employees to sexual harassment and proposing new means to protect them.

Reports by hotel workers of harassment and assault are nothing new. A 1998 study conducted by researchers in Glasgow found that 44 percent of hospitality workers had experienced some form of workplace violence. Incidents of sexual violence were almost exclusively reported by those in non-managerial positions. A 2000 South Bank University study concluded that:

Hotel staff members are vulnerable to harassment because of their status relative to the customers…the status of these roles is simultaneously decreased because they are frequently filled by people with a weak position within the labor market: by women, by young people, by members of disadvantaged ethnic groups.

Housekeeping particularly is almost exclusively staffed by women, among them a growing number of Latino and Asian immigrants.

Now, in the wake of the DSK scandal, to empower workers to speak up about harassment, two New York legislators–state assembly member Linda B. Rosenthal and Republican Senator Betty Little–have put forward a bill requiring a sexual harassment training for all hotel employees. The bill includes new protections for those who report sexual harassment, as hotel staff may be reluctant to come forward for fear of losing their jobs.

New York State Assembly member Rory Lancman took hotel worker protection a step further by suggesting New York provide all hotel housekeepers with panic buttons to alert security personnel. “Housekeepers at hotels have a right not to be sexually attacked,” said Lancman to the New York Daily News. “We send hotel workers into rooms. By themselves. With no security.” While Lancman looks for a co-sponsor for the bill in the state Senate, the New York Hotel Workers’ Union is talking with hotel associations to enact the plan.

Some of the Glasgow study’s most troubling findings concerned the lack of response by employers. Less than a third of the non-managerial staff who reported harassment to management saw any action taken. Half of respondents believed fear of retaliation by employers kept many hotel staff from reporting violent incidents.

But recent events suggest hotel administrators and legislators alike may be changing their policies. Last week–in an event that bears striking resemblance to the DSK allegations–Egyptian businessman Mahmoud Abdel-Salam Omar was charged with groping his room attendant at the Pierre Hotel on Fifth Avenue. When the woman first reported the incident to her supervisor, he advised her to tell the hotel security director first instead of going directly to the police. Because the director was off-duty, the woman was sent home and Omar remained out of custody. But Omar was arrested the next day, and the Pierre Hotel fired the supervisor who delayed the victim’s report. They have since agreed to equip all staff members with Lancman’s proposed alert devices.