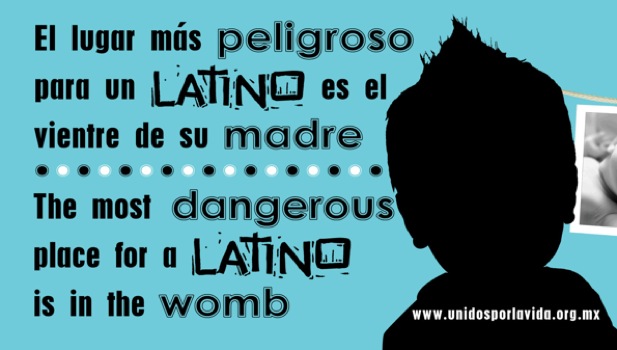 When I opened my email and saw a photo of the latest anti-choice billboard, I was angry, but I can’t say that I was surprised. I have been anticipating this day. The billboard, which reads “The most dangerous place for a Latino is in the womb,” is slated to go up in Los Angeles in both Spanish and English and continues the race-baiting strategy the anti-choice movement has been pursuing aggressively in the black community for months.

These billboards seek to divide us by using inflammatory language and willfully ignoring the real reproductive health and justice issues that women of color face. They seek to split both the pro-choice community and communities of color. It is a classic divide-and-conquer strategy, but we cannot let them divide us that easily.

The truth is that these billboards do not only attack women of color. They attack all women and promote the notion that women cannot be trusted to make personal decisions about their own bodies and their families. We women must stand together, and this means we need to fight against this divisive language and the health disparities that have made campaigns like these possible.

These anti-choice organizations are exploiting serious socioeconomic and health disparities between white women and women of color. Women of color are disproportionately barred from access to the most basic of reproductive health services, including birth control, and therefore have higher rates of unintended pregnancy and abortion. But instead of expanding the range of reproductive health care options available to women of color, the billboards focus on sensationalizing unintended pregnancy and abortion. They fail to acknowledge the structural inequities at play, such as the distressing fact that Latinas have the highest rates of uninsurance out of any other group of women [PDF]. Immigration plays a role in that: Immigrant women are often ineligible for public programs, such as Medicaid, that could help them have access to comprehensive reproductive care–from pap smears to birth control.

Standing together against these racist billboards, then, not only means speaking out about the billboards themselves, but also speaking out about the disparities that specifically target women of color. We must demand that birth control be included amongst the free preventive services to be covered under health-care reform. We must stand up for comprehensive immigration reform that takes women into account. We must demand public funding for women who choose abortion.

These condescending messages are trying to tell women of color that we do not have the capacity to decide what is best for ourselves and our families, and we won’t have it. Billboards like these have no place in our communities. We must fight these billboards, and we must do so while standing up against the inequities that are at the root of stark reproductive health disparities.