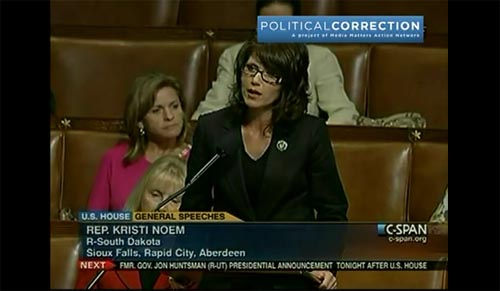 One criticism that really irritates GOP lawmakers is the argument that their policies are bad for women, so every now and then conservative congresswomen band together to make the case that the “anti-woman” charge is unfair. Their defense generally goes something like this: GOP policies are good for America, and women are Americans, ergo Republicans are more “pro-woman” than Democrats.

The other night on the House floor, 14 of the 24 Republican women serving in the chamber stepped forward to explain why women are well served by Republican policies. Most of them talked about the alleged failure of President Obama and recited dishonest talking points about the health-care law, but the argument was best summed up by freshman Rep. Kristi Noem (R-SD):

The Republican agenda is indeed pro-women. It is pro-woman because it is pro-business, pro-job creator, pro-family, pro-economic growth.

Noem’s argument would be more compelling if Republicans had spent their first six months in the majority focusing on job creation. Instead, they’ve wasted time on bills that have nothing to do with the economy but would make abortions less accessible, change the definition of rape, and cut funding for women’s health care. Indeed, the House-passed No Taxpayer Funding For Abortion Act is overtly anti-business legislation that would punish private companies for offering legal health-care procedures.

Watch a roundup of the GOP women’s statements here:

TOP: Rep. Kristi Noem (R-SD) speaks about why the Republican Party is pro-women.