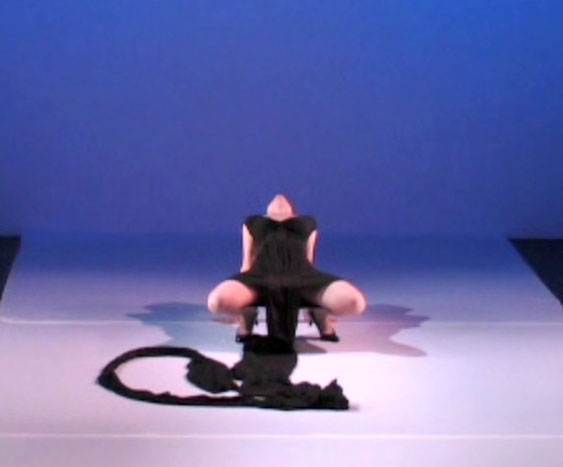 Dixon Place, on New York City’s Lower East Side, is many things: theater, performance laboratory … bar. But one thing it is not? Beholden to trends in art or performance.

The 25-year-old venue, recently reborn in a commercial space (it used to operate out of one of the founder’s homes), is used to carrying the torch for experimental performance. Though long gone are the days when Jesse Helms threatened the National Endowment for the Arts and grants to feminist performance artists Holly Hughes and Karen Finley were vetoed, Dixon Place keeps the feeling of the era alive with posters comparing Helms to Senator Joe McCarthy and a poster that reads, “Keep your laws out of my crotch!”

In keeping with their long-held belief in new work for its own sake, on June 17 Dixon Place presented Femmes–an evening of experimental works from four independent women artists. The program could be described as culture-wars-era performance art redux, complete with the requisite nudity, breaking things and dismantling of gender roles.

Jil Guyon‘s “Widow’s Veil” was a dramatic solo which she has described as “a woman’s journey through grief.” At first Guyon made overwrought gestures of typical femininity–delicately serving tea to an imaginary suitor, for instance–without moving her feet. These gestures are interspersed with upper-body contortions, conveying a feeling that she is compelled by forces beyond her control. By the piece’s climax, Guyon, still driven by some internal force, tries to hang herself with her scarf/veil. The work was simple and effective, the execution beautiful.

A solo by Karen Bernard from “Ouette” was perhaps the most experimental work of the evening. The piece begins with a laptop and projector on a wheeled chair, which are used both to project text and sound (from Francois Ozon’s film Swimming Pool) and as a prop in the dance. This conceptual piece, perhaps not yet fully realized, felt a bit like a whimsical corporate presentation, with dance inserted in the middle.

“Stroll2,” danced by Emily Bock and Hadley Smith, was a playful and meditative work, described by choreographer Johanna S. Meyer merely as “a dance piece for two performers, a mask and a beanbag chair.” It was that and so much more. “Stroll2” combined great acting with clever prop work, showcasing the talents of two thoughtful young performers.

“Charlie Heatherington: 1976” was a revelation. Performed and choreographed by Dana Michel, a Quebecois former track star who goes by the pseudonym Charlie Heatherington, “1976” was perhaps the most daring and original performance piece since Karen Finley. Michel/Heatherington emerged from behind the audience dressed like a 70s pimp, in yellow stockings and a huge fur coat, and proceeded to work herself into a frenetic disco freak-out, not unlike that of a Pentecostal churchgoer, representing, among other things, her struggle to prove that she is feminine (Michel has a boyish, athletic build). The tension builds as Michel/Heatherington continues a palpably uncomfortable exploration of her body through movement. Eventually, she dons a clown nose and loses most of her clothes, revealing the helpless female body beneath them, though she continues the same agitated movements. The piece ends with nearly naked Michel/Heatherington face down in what could be a trashcan. When the lights came up, a calm (and demure) Michel grabbed a prop to cover herself, and shyly bowed before exiting the stage quickly, underscoring how revealing and personal the performance had been for her. The still-stunned audience erupted in the loudest applause of the night.

The evening was a welcome throwback to a time which unapologetically valued all things queer, provocative and new. Dixon Place and the women performers it supports should continue to break ground artistically, providing physical and emotional space for many otherwise underfunded and under-appreciated artists. And they can do so knowing that Jesse Helms is now six feet under.

Guelda Voien is a freelance writer living in New York City. Her work has appeared on the blogs of the Los Angeles Times and LA Weekly, and in the New York Observer.