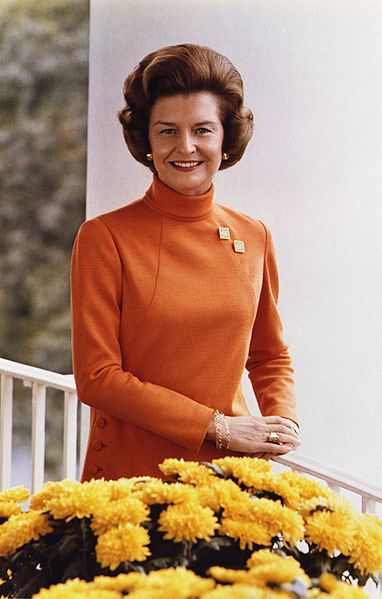 I saw Betty Ford in person for my first and only time in November 1977. She was seated next to Rosalynn Carter, and they shared the stage with Maya Angelou and New York’s Bella Abzug, the former congresswoman who had written the legislation governing the National Women’s Conference in Houston. The current and former first ladies were honorary co-chairs of the conference, and Lady Bird Johnson was there as well, about to introduce the keynote speaker, Texas Congresswoman Barbara Jordan.

As the wife of a Republican former president, Betty Ford seemed completely comfortable sitting on the dais with her Democratic counterparts. A member of her party, Representative Robert Dornan of California, called it “the greatest tragedy of all” that she and the other first ladies were sitting “properly with their hands in their lap” alongside Bella Abzug, “approving of sexual perversion and the murder of young people in their mothers’ wombs.” His outrage referred to two of the 26 planks that the widely representative national delegates had brought to Houston from their state conferences and were about to pass overwhelmingly: one favoring gay and lesbian rights—including the right to serve openly in the military—and one demanding the continuing right to abortion and reproductive freedom.

Betty Ford had already worked tirelessly with other Republican and Democratic women in their ultimately fruitless effort to gain ratification for the Equal Rights Amendment. So the convention’s strong endorsement of the ERA wouldn’t have been a surprise to Dornan or to Phyllis Schlafly and other right-wing opponents of the women’s movement who gathered outside the convention in protest—powerless to affect the proceedings that had been authorized and funded by Congress. In her eulogy this week, Cokie Roberts said,

Betty Ford’s support of the Equal Rights Amendment did not arise full blown after she became First Lady. She had been pushing it for years—and making sure her husband got the message.

Gloria Steinem remembers a feminist button of the time that read: “We sleep a little better every night knowing that Betty Ford is sleeping with the President.”

The recent tributes honor Betty Ford as courageous and outspoken—and she was that, in her political positions favoring women’s rights in a time when anti-feminists were poised to capture the Republican Party as well as in her honesty regarding medical battles with breast cancer and alcohol and prescription drug abuse. She dared to admit on “60 Minutes” that it wouldn’t surprise her if her teenage children were sexually active or experimented with marijuana. Quite a refreshing contrast to the 1980s “Just Say No” mantra on drugs espoused by the next GOP First Lady, Nancy Reagan.

Making her opinions known was part of the bargain for Betty Ford. Before she was suddenly installed as First Lady—after Richard Nixon’s quick helicopter exit from Washington—she said “I’ll move to the White House, do the best I can, and if they don’t like it, they can kick me out, but they can’t make me be somebody I’m not.” Indeed, she had no reason to soft-pedal her point of view because she believed in engaging with respect and in the power of robust debate. My co-editor and I quoted from her address to the Houston delegates on that point in our oral history of Bella Abzug:

We must keep focus on our goals in business, education, employment, and politics, or in the home. We may have different interests, but we shouldn’t be dismayed by the clash of opinion and ideas. It has been said the ‘evils’ of controversy will pass, but its benefits are permanent.

Cokie Roberts’ father Hale Boggs was majority leader of the House while Gerald Ford was minority leader—strongly partisan leaders of their respective parties and yet, she said, good friends. Some years ago, Betty Ford had asked her to speak at her funeral, and Roberts said, “the assignment came with instructions. Mrs. Ford wanted me to remind everyone of the way things used to be in Washington.” Roberts added that she “wouldn’t be at all surprised if she timed her death to make sure she could convey the message of comity this week, when it seems so badly needed.”

At the four-day Houston conference, there were many moments of intense passion—when Coretta Scott King and other women of color presented what was then called the Minority Women’s plank. which included the perspectives of black women and Latinas as well as Native American, Asian American, and Pacific Islander women; when author and NOW co-founder Betty Friedan renounced her previous opposition to embracing lesbian rights as a core feminist demand. The resolutions had been hard fought in the states. But by and large the debates in Houston proceeded without bitter rancor—a stark contrast to the name-calling going on outside the convention hall, malice that seems in retrospect a harbinger of the suffocating acrimony that threatens the nation’s political will.

In the New York Times, historian and journalist Rick Perlstein argued that the historical importance of Betty Ford “may well have been greater than those of her husband.” Although she was never elected as a leader, Perlstein wrote, “Few Americans changed people’s lives so dramatically for the better.”

Photo of Betty Ford from Wikimedia under Public Domain.

Mary Thom is an author, editor, and journalist who edits the Women’s Media Center Exclusives. A staff member and editor for Ms. magazine from 1972 to 1991, she now writes and consults for a number of non-profit women’s organizations, including the National Council for Research on Women. Her books include Inside Ms.: 25 Years of the Magazine and the Feminist Movement and Letters to Ms.: 1972-1987. She is editor, with Suzanne Braun Levine, of an oral history, Bella Abzug: How One Tough Broad from the Bronx Fought Jim Crow and Joe McCarthy, Pissed Off Jimmy Carter, Battled for the Rights of Women and Workers, Rallied Against War and for the Planet, and Shook Up Politics Along the Way (Farrar, Straus & Giroux).