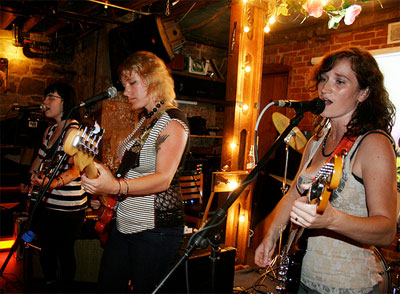 Sprung from a living-room conversation between friends about feminism, Titwrench is now heading into its third year and has grown into a four-day festival of underrepresented artists (mostly women), operating without any sponsorship whatsoever.

Even if you can’t make the trip to Denver on July 28-31 for the festival, you can help offset the costs of putting on the grassroots event by donating. This year’s Titwrench fest will again focus on unconventional and overlooked artists, with a women and women-identifying contingent of ambient, folk and experimental bands and avant-garde theatrical performances that encourage the audience to dance, sing and shout along. The weekend will host dozens of performances, with music from the likes of harsh drone queen Joy Von Spain (Seattle), bratty punks The Coathangers (Atlanta) and Denver’s own crystal-voiced looping pedal genius, Married in Berdichev.

Titwrench is also host to workshops centered on women’s empowerment and education. For example, representatives from Planned Parenthood will be leading “Sex Positivity,” an afternoon discussion focusing on proactive sexual health.

In the past, Titwrench has raised enough money to pay the bands, performance artists and dancers who have traveled to Colorado for the festival. But this year, the organization would like to give back financially to the community that makes it all happen. From the door folks to the sound people and stage managers, all labor is volunteer. Plus, unlike other summer festivals, Titwrench arranges housing for performers coming from places as far as Canada and Australia, setting artists up with safe living spaces for the entire weekend–also made possible solely by volunteers who choose to open up their homes.

Beyond this one weekend, Titwrench’s impact can be seen in the community throughout the year with its “Surfacing” series, a showcase of women musicians and artists that runs each month leading up to the festival at various Denver venues. Titwrench has also been one of the inspirations behind “Damn Gurl,” the monthly “safe space” dance party that invites all members of the GLBTQ community and its allies out to celebrate who they are. And, empowered by their 2009 Titwrench experience, musical puppeteers Milch de la Máqina put on “Gatas Y Vatas,” a one-day celebration of female solo musicians in Albuquerque, New Mexico, in 2010.

Titwrench 2011 will take place in Denver, July 28-31 at G.L.O.B. (3551 Brighton Blvd.) and The Mercury Café (2199 California St.) Tickets are $15-35 and can be purchased in advance through Brown Paper Tickets or at the door. For a full list of set times and activities, visit www.titwrench.com or the festival’s Facebook.

Bree Davies is a journalist, musician, lover, ally and activist from Denver, Colorado. She has a degree in journalism from Metropolitan State College and has been enamored with women's roles in music since she saw her first concert, Hole, in 1994. She has been writing since she was four years old, and playing bass guitar since she was fourteen. Bree has toured the country with her band, Night of Joy, and writes daily for Denver's local alternative publication. Not discovering her feminist voice until her mid-twenties, Bree has been catching up on speaking out ever since.