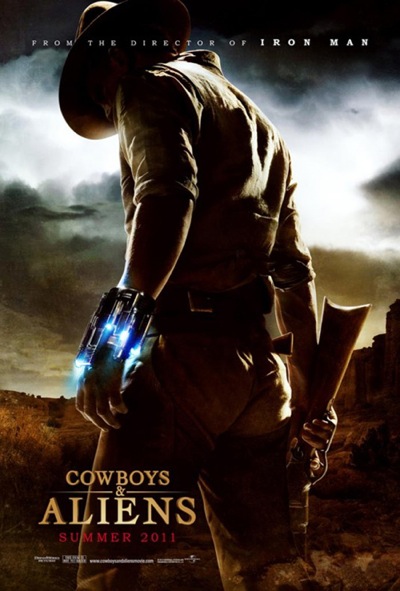 Given that the new film Cowboys and Aliens is the structural and symbolic equivalent of “Cowboys and Indians,” I went to see it in order to discover if this newfangled Western-Alien mash-up is marred by the same racial representations as the majority of its Western film predecessors. And yes, for the most part, it is.

The horrid title, which equates “alien” with “Indian,” was audibly laughed at in the theater. I heard similar chuckles when the film was discussed at Comic-Con, along with comments indicating the film would be a lark–an exciting and wacky new twist on two genres that have been done to death. My reaction to the title was viscerally different: In and of itself, to me it is incredibly problematic from a race perspective. To equate Native peoples with aliens is in keeping with the history of the word “alien,” which has been used to construct the Other, both human and extraterrestrial. Given that the term “illegal alien” is still widely used to refer to migrants and undocumented workers, the word “alien” is equated with both the racialized Other and baddies from other planets. As expected, then, the film did indeed further, rather than undercut, many of the racialized components of Western films–especially in relation to the following six tropes:

The film displaces Native people as “the enemy” of whites in the 19th century West, replacing them with aliens from another planet. Throughout, a refrain of “our people” echoes racist terminology such as “those people” or “your people”–phrases used to typically name whites as the good people and everyone else a dangerous Other. Though the film constructs the key enemy as outer space aliens, it still relies on a system of white people at the center–as “us.”

White Cowboys Are the Heroes

As argued by whiteness scholar Richard Dyer, in Western culture whites play predominant roles. As he writes, “At the level of representation…whites are not of a certain race, they’re just the human race.” This is apparent in the film in its representation of all the white characters as “just human” while the characters of color are carefully singled out as types: the hot Spanish wife, the exotic Ella (Olivia Wilde), the good Native American farmworker and so on. As Dyer argues,

This assumption that white people are just people, which is not far off saying that whites are people whereas other colors are something else, is endemic to white culture.

Further, as most of our ideas about Native cultures come from white culture, whites and white history are glorified. As Native scholar Elizabeth Bird argues, “These stories, at a mythic level, explain to Whites their right to be here and help deal with lingering guilt about the displacement of Native inhabitants.” In the film, whites are the “good cowboys” who make the defeat of the alien invaders possible. It is suggested that the earlier defeat of both Latinos and Natives are a good thing, for now good white cowboys are able to ward off yet another threat–“real” aliens from another planet.

Dolarhyde (Harrison Ford) is clearly a racist character, yet we are supposed to like him. As for the other lead white hero, Jake Lonergan (Daniel Craig), at the outset of the film he has amnesia, and when asked “what do you know” he bluntly replies “English”–as if knowing this is enough. This was one of the few moments in the film that the audience responded with laughter, again revealing that joking about alien otherness (this time in relation to language) is seen as funny. The absence of Latinos in the film has not gone without comment. Being that the film is set in Arizona, the whiteness of the cast seems historically inaccurate, as the “Shouldn’t there have been more Latinos in the film?” discussion thread at IMDB addresses.

As scholars of Native American literature and film regularly note, Natives are often depicted as types: the Good Indian, the Bad Indian (or Savage), the Noble Warrior and so on. Nat Colorado (Adam Beach) is the film’s Good Native. He clearly loves Dolarhyde as a father and serves as the posse’s tracker (another stereotypical portrait) and defends Dolarhyde when their group meets up with a group of Apaches, telling them they need to open their hearts to Dolarhyde. Just before his death, he says to Dolarhyde, “I always dreamed of riding to battle with you,” to which Dolarhyde replies, “I always dreamed of having a son like you.” Here, the film attempts to ameliorate Dolarhyde’s racist ways in one tender moment, much in the same way that people who have racist histories deny their racism with the “but I have black friends” comment.

Contrasted to Nat’s Good Native character, the film gives us a group of Savage Warriors in the Apaches. When they are first represented, there is an overwhelming sound of their yelping–thus keeping with the tendency to animalize Native people in filmic depictions. The chief blames white people for the arrival of the evil aliens, but as the narrative doesn’t hold up this accusation, he becomes an unlikeable character who wrongly blames whites. In other words, the Natives are the racists, not the whites. The audience is encouraged to take Dolarhyde’s view that the chief is a fool who doesn’t understand battle tactics. When Dolarhyde tells him, “We can’t just run around hollering and shooting arrows at the damn thing,” the film draws on the images in Western films of Native peoples as savage but ultimately unsuccessful warriors. Here, the film asks the audience to side with Dolarhyde, agreeing that “white ways” of battle are better.

Though Dolarhyde, Jake and crew ultimately form mutual respect, and both groups are instrumental in the aliens’ defeat, the fact that the film never shows the Apaches again after the battle is in keeping with their framing as tangential–an undifferentiated tribe that is easily forgotten once the aliens are defeated. Further, the fact that a majority of Native peoples were peaceable groups is once again denied, cementing the representations of Natives as warriors.

Native Americans Live in the Past

The fact that the film closes back in the town of Absolution, Ariz., with no further mention of the Apache people accords with the tendency to depict Natives as a vanishing/dying race that exists only in the past. The future, according to the film, belongs to whites like Dolarhyde and Jake. This is further underscored by Nat’s death–the Good Native does not survive. Instead, Dolarhyde’s son Percy (Paul Dano), is set up at film’s end to carry on his father’s (white) legacy.

Though Ella (Olivia Wilde) is ultimately revealed not to be a Native Woman, the trailers and film lead the audience to believe she is–especially through comments such as “they took my people, too” and “they killed all my people.” She accords with the Indian Princess model of the exotic, otherized women who is rendered likeable and heroic through her associations with a white hero. Jake, in defending her and insisting she is not the “whore” others call her, frames her as a warrior princess. She is begrudgingly allowed to join the posse with the line, “We got a kid and a dog, why not a woman?”–a line which both infantilizes and animalizes her. Granted, she is given much more of an action role than females often are in such films, but like Nat she eventually dies. Only white guys get to save the day and live.

While this Western may not be as odious as many others in its representation of white/Native relations–and actually allows for a somewhat positive depiction of Native peoples–it nevertheless still accords with dominant racial ideologies in which white males are center and others are peripheral. As such, it can be viewed as an “old movie,” which media scholar Stuart Hall defines as “synonymous with the demonstration of the moral, social and physical mastery of the colonizers over the colonized.” Though the main enemy in the film is the “alien race,” the white colonizers are shown as superior to the colonized Natives. Ultimately, the film frames “us” as white cowboys and “them” as alien and Native.